The Supreme Court has granted the federal government’s request to fully enforce the set of restrictions known as the “travel ban” while the Appeals Courts hear the merits of the ban. The Court ruled 7-2 that individuals from eleven countries could be prevented from entering the country. There’s a lot of confusion about how the ban works, what exceptions exist, and the arguments being made. The full order can be found here. Here’s a quick FAQ to break everything down:

Individuals from the following eleven countries are prohibited from entering the United States: Iran, Libya, Yemen, Somalia, Syria, North Korea, Venezuela, and Chad. That means the U.S. will not approve Visas for people traveling on passports from those eleven countries.

Who Does the Ban Apply To?

The third version of the travel ban suspends the following visas:

Chad – Only B-1 business and B-2 tourist visas are suspended. All others, including F and M visas for students and H visas for temporary workers, are not suspended.

Iran – Only F and M student visas and J visitor visas are permitted to enter the country.

Libya – Only B-1 business and B-2 tourist visas are suspended. All others, including F and M student visas and H visas for temporary workers, are not suspended.

North Korea – All entry is suspended.

Syria – All entry is suspended. 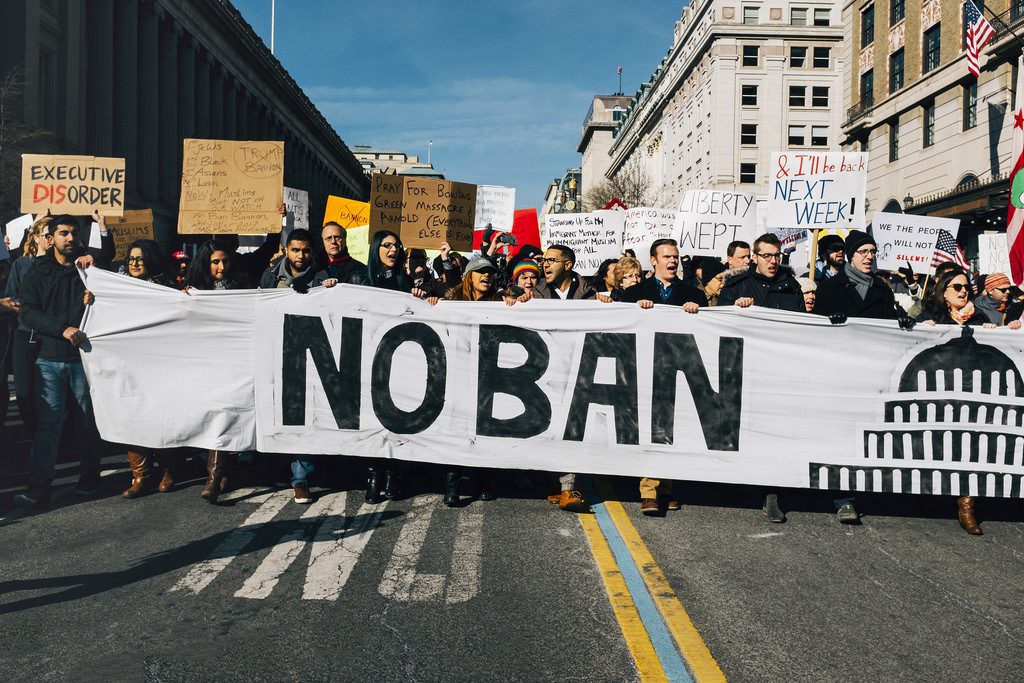 Venezuela – The B-1 business and B-2 tourist visas of certain government officials and agencies from Venezuela are suspended.

Yemen – Only B-1 business and B-2 tourist visas are suspended.

Somalia – All entry of immigrants is suspended (immigrants are individuals who intend to permanently reside in the United States).

Are There Any Exclusions or Exceptions?

An exception is when the law does apply to that person, but the law suspends the application to that person. The travel ban currently has the following list of exceptions:

For example: Although business visas from Chad are suspended, a duel citizen of Chad and France could claim an exception to the business visa ban if that person also had a passport issued by France. In contrast, a person holding a student visa from Chad would still be allowed to enter regardless of dual citizenship because that person was excluded from the ban.

What are the Differences between Each Version of the Travel Ban?

The first version, Executive Order 13769, was signed by Mr. Trump on January 27, 2017. It banned individuals from seven different countries, all with Muslim majorities. The ban would have lasted for 90 days for non-refugees and 120 days for refugees from those countries. The ban left a loophole from refugees of “religious minorities.” This version was suspended by federal judges and the administration rescinded the order a few days later.

The second version, Executive Order 13780, was signed in March 16, 2017. This version removed Iraq from the list and dropped the “religious minority” exception, but kept the 90 days non-refugee and 120 day refugee expiration dates. Federal judges suspended this second version until the Supreme Court allowed a partial ban to go into effect on June 26. The Supreme Court added a “bonafide” exception, whereby persons would be allowed to enter the U.S. if they had a genuine and sincere reason to be in the country, including family.

The third travel ban, Proclamation 9645, ended the expiration dates, removed Sudan from the list, and added North Korea and Venezuela. The Supreme Court’s December 4th order allows this version of the ban to go into full effect without the bonafide exception.

Can a District Court Judge Stop an Executive Order Nationwide?

So is the Travel Ban Constitutional Now?