Donald Trump ignited a firestorm last week after he wrote a tweet saying that four Congresswomen should “go back” to the countries they came from rather than criticize him.

Shortly thereafter, Mr. Trump held a rally where his supporters chanted “Send her back” regarding Representative Ilhan Omar. In response, the House of Representatives voted to condemn Trump’s statements, though debate is continuing as to whether the House should formally censure the President.

Senator Tim Kaine pointed out that telling people to “go back” is illegal under federal discrimination law. Indeed, the Equal Employment Opportunity Commission (EEOC), the federal agency tasked with enforcing civil rights laws in the workplace, specifically states on its website that “comments like, “Go back to where you came from” are “examples of potentially unlawful conduct.” Courts have generally supported the EEOC’s position.

Even the Fifth Circuit, arguably the most conservative circuit in the country, has ruled that comments such as “Why don’t you just go back where you came from since you believe what you believe?” can form the basis for a hostile work environment suit if such comments are frequent enough.

What is National Origin Discrimination?

The debate about telling someone to “go back” has largely focused on whether such comments are racist. Racism is often vague and ambiguous and it is often debatable whether a statement or action could be considered racist. Instead of debating whether telling someone to “go back” is racist, it would far easier to show that such comments discriminate on the basis of national origin.

Consider the following conversation I once had:

“Q: No really where are you from?”

“Q: Where are you really from?”

“A: Earth in the Milky Way Galaxy.”

The questioner apparently refused to accept that an Asian could be an American. The questions were irrelevant to work and there was no subtlety about the substance of the questions. 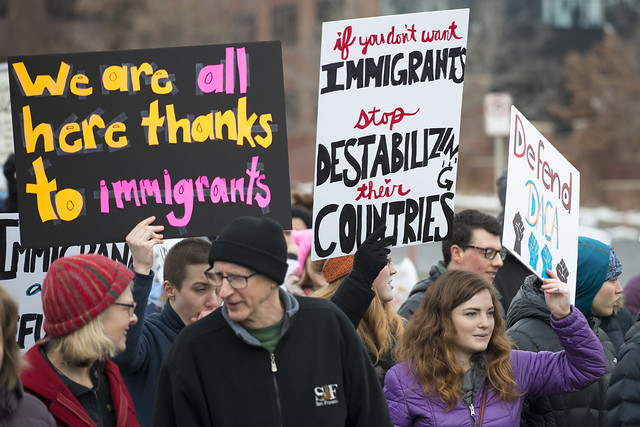 The EEOC Process for Workplace Discrimination

The employee may allege that the general work environment was hostile towards him or her, based on the following factors: (1) the frequency of the discriminatory conduct; (2) its severity; (3) whether it is physically threatening or humiliating, or merely an offensive utterance; and (4) whether it interferes with an employee’s work performance. No single factor is determinative.

If the employee can provide sufficient evidence that there was discrimination, the burden shifts to the employer to show that the alleged acts were not discriminatory. The employer can rebut the allegations by showing there were alternative motives.

For instance, the decision to terminate an employee might be based on poor performance rather than discrimination. However, the employer would have the burden of producing any performance reviews, customer complaints, or other evidence to show that there was an alternative motive for an alleged discriminatory act.

Despite the evidence that the President is publically discriminating on the basis of national origin and that such discrimination is illegal under federal law, some people continue to make excuses for Trump’s behavior. One commentator wrote:

“But while we know that racist language is generally on-brand for our president, there’s no real evidence (at least that’s been publicized) that the tweet was more than a one-time barb. Despicable, yes. Discriminatory, probably not.”

Sadly, the President’s tweets about the four Congresswomen are not a “one-time barb.” Donald Trump was the most prominent promoter of the conspiracy theory that President Obama was not born in the United States, even after President Obama released his long-form birth certificate in April 2011.

Trump also made defamatory racial remarks about Judge Gonzalo Curiel, the federal judge who oversaw the lawsuit regarding Trump University. Judge Curiel was born in Indiana, but that didn’t stop Trump from publicly remarking that Judge Curiel couldn’t be objective because he was “Mexican.”

Donald Trump may seem immune from consequences thus far. However, private businesses would face significant lawsuits if they allowed these similar comments regarding national origins in the workplace.