Courtney “Taylor” Irby was arrested and charged for enforcing a court order directing her husband to surrender his firearms. Around June 14, Mrs. Irby and Joseph Irby were involved in a verbal altercation following a court hearing for their divorce. When Mrs. Irby left the courthouse in her vehicle, her husband allegedly followed her and rammed his vehicle into her back bumper. Mr. Irby allegedly screamed and yelled at her and ran his wife off the road several times.

Taylor Irby called police and police arrested Joseph Irby for aggravated battery with a deadly weapon, after they found him waiting for her at their children’s day camp. Police found scratches on Mr. Irby’s bumper that had paint consistent with his wife’s vehicle. Mr. Irby swore at the arresting officer and called her a “man hater.” At Joseph Irby’s bail hearing, the judge ordered that he surrender all firearms in his possession to the police.

The day after Mr. Irby’s bail hearing, Taylor Irby went to her husband’s apartment to collect his weapons. She had never been inside her Mr. Irby’s residence before and he had never given her permission to enter. However, Mrs. Irby had taken her husband’s keys after his arrest and she used them to gain entrance.

Taylor Irby turned over her husband’s pistol and rifle to local police. When the officer on duty asked if she committed armed burglary, she responded: “Yes, I am, but he wasn’t going to turn them in, so I am doing it.” Mrs. Irby was arrested and charged with armed burglary and grand theft.

Domestic violence victim’s advocates urge prosecutors to drop the charges, especially since she has already spent five days in jail. Mr. Irby’s attorney disputes that she truly feared for her life, since the parties are currently involved in a divorce proceeding and custody battle for their two children. 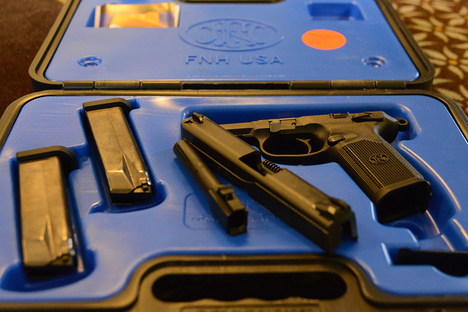 What is the Process for Surrendering Firearms?

Most states empower their judges to order the confiscation of firearms while a restraining order or domestic violence charge is pending. However, the government is expected to execute the court’s orders and seize the weapons if the defendant refuses to cooperate. Indeed, Florida passed a law last year that allows police to seize guns from those who pose a significant danger of injuring themselves or others.

The judicial process is necessary to ensure that the peace is kept. Although Mrs. Irby knew that husband would be sitting in a jail cell when she broke into his apartment, she had no idea if anybody else was residing there. If Mr. Irby had a roommate, girlfriend, or house sitter, Mrs. Irby could have provoked a violent confrontation.

Moreover, Taylor Irby had no authority to search the premises. When police are called upon to execute a judge’s order, they are limited only to the contents of the search and seizure warrant. They are also required to issue a receipt showing exactly what they seized in case the order is lifted and the items returned to the owner.

Mrs. Irby could have stolen other items from her husband’s apartment that the court had not authorized to seize. Although the legal system can be slow and frustrating, that does not give private citizens the right to take the law into their own hands.

The burglary and grand theft charges against Taylor Irby are not actionable despite the violation of her husband’s due process rights. First, grand theft and burglary should not be separate charges. The common law definition of burglary is unlawfully breaking and entering a dwelling for an illegal purpose. Since stealing property is an illegal purpose, the charge of burglary must include grand theft. Many jurisdictions would combine the two charges into one burglary indictment since theft is an element of burglary and burglary is typically the more serious crime.

Second, the theft element of the burglary charge should be dismissed. Larceny, the legal term for theft, is most commonly defined as taking property for an unlawful purpose. Mrs. Irby was merely trying to enforce the court order. She removed the pistol and rifle from the apartment for the explicit purpose of turning them over to law enforcement.

The state should not make it illegal to attempt to comply with a court order nor should it punish people who surrender themselves to the police. Mrs. Irby might have been overzealous in enforcing the judge’s injunction, but she has been very open and transparent by submitting herself to the law for judgment. The law should not punish her for that transparency.

However, we cannot overlook the fact that Taylor Irby did commit a crime by breaking and entering her husband’s apartment. She did not reside in the apartment, had no ownership interest in the property, did not have her husband’s consent to be in there, and she had no authority to act in the manner she did. Even worse, she allegedly stole her husband’s keys in order to get into his apartment. Those keys should have been retained by law enforcement.

Joseph Irby would portray this incident as his wife’s attempt to obtain an unfair advantage in the divorce and custody battle by illegally searching his residence. Even if her seizure of his firearms isn’t considered theft, her illegal search could still be the basis for a burglary charge. However, given Mrs. Irby’s prior restraining orders against him and the available evidence, the context suggests that Taylor legitimately feared for her life. Although Joseph did not pose a present danger to her at the time (since he was sitting in jail), the order to relinquish his firearms was in preparation for a bail bond. Given the context, Taylor Irby acted in reasonable fear for her life when she decided to search her husband’s apartment.

Mrs. Irby should be reprimanded for breaking into her husband’s apartment. Although she did not commit a crime by removing her husband’s firearms for the purpose of giving them to the police, entering the apartment itself was a crime. However, instead of burglary or grand theft, she should be charged with criminal trespassing and tried accordingly.