Investigators have recommended that no charges be brought against a US Capitol Police Officer in the shooting of a woman involved in the insurrection at the Congress on January 6, 2021. The shooting was under investigation by DC Metropolitan Police, the US Attorney’s Office in DC, and civil rights prosecutors as part of a routine process for shootings involving the Capitol Police. Justice Department officials are expected to make a final decision in the coming days.

Ashli Babbitt was identified as the woman who was shot after allegedly attempting to enter through the window of a door that had been barricaded by chairs and guarded by Capitol Police. She was wearing a Trump 2020 flag during the siege after flying all the way from her home in San Diego, CA to Washington DC in January 2021. The door was the entrance to the Speaker’s Lobby of the US Capitol building. Babbitt was hit by a single bullet and she immediately fell to the ground. Babbitt was given medical assistance but was pronounced dead at the hospital.

Babbitt was a frequent attendee at Trump rallies and had been in the US Air Force several years prior. She frequently shared content promoting political conspiracy theories often pushed by far-right figures. Babbitt had prior restraining orders against her by her husband’s ex girlfriend. Babbitt had been accused of stalking, harassing, and ramming her car into the ex girlfriend’s car multiple times.

Defense of Others and Property 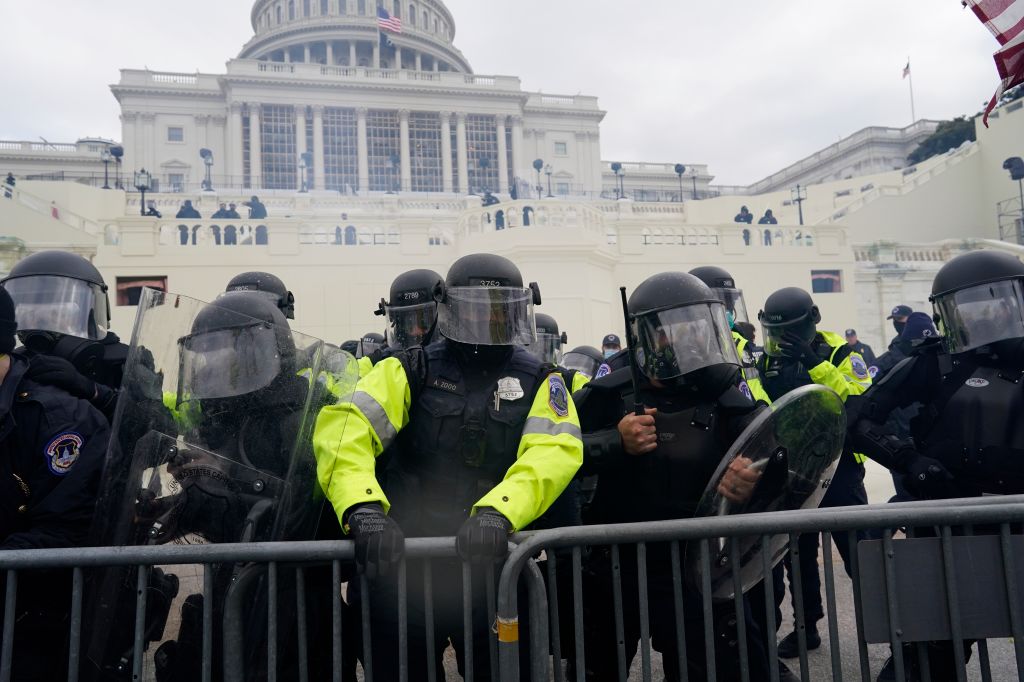 There is a strong defense that the Capitol Officer who shot Babbitt was acting in self-defense, defense of others, and defense of government property. Babbitt was killed during the Storming of the US Capitol on January 6, 2021. There are multiple videos of the shooting, but all of them show that Babbitt had been climbing a capitol door moments before her life was ended.

The biggest issue here is whether a reasonable amount of force was used. Did the officer have to fire his weapon at her? Could he have retreated instead of firing his weapon?

The mob that Babbitt was part of had already made its way to the lobby of the Speaker’s office, a location that they shouldn’t have been at or been able to access in the first place. The officer was alone and he was facing a large mob with more than dozens of people. The only thing separating the officer from the mob was a single door that had been hastily barricaded with furniture. The hallway the officer was in lead to the Speaker’s office, where members of Congress were still being evacuated.

The differences between the two women should be obvious. Babbitt was killed while she was attacking government property in broad daylight while a police officer was attempting to defend it. Taylor was killed while on private property by police officers late at night while the officers were attempting to carry out a search warrant. One of them was a nurse while the other was a veteran of the Air Force.

Babbitt had prior restraining orders after stalking her husband’s ex girlfriend while Taylor’s boyfriend was accused of being a drug dealer. Oddly, the latter’s association with a suspected drug dealer is sometimes brought up even though Taylor herself was never accused of drug dealing. Taylor’s boyfriend was also only a suspect. Neither Taylor nor her boyfriend was committing any crimes at 2:00am in the morning. They were merely sleeping when the police burst through their door. Babbitt, however, was actively committing a crime by attempting to break through a door that an officer was guarding.

The officers who allegedly killed Taylor were charged with wanton endangerment by a grand jury. Kentucky’s Attorney General asserted that the grand jury had considered all the potential charges, a claim that the grand jury has since publicly disputed. The investigation into Babbitt’s death is still ongoing, but it appears that the officer involved in her death will not face any charges.

Should I Speak with an Attorney?

Self-defense laws can often be complex and difficult to assert correctly. If you need assistance with any claims involving self-defense, you may wish to speak with a criminal defense lawyer immediately. An attorney will be able to represent you in court during criminal and civil proceedings.