The Supreme Court hit the resume button on indoor worship in California churches earlier this month. The justices lifted the complete attendance ban but allowed bans on singing, chanting, and a 25% attendance capacity cap. The Court was notably split three ways: Justices Kagan, Breyer, and Sotomayor would have kept all restrictions; Justices Thomas, Gorsuch, and Alito would have lifted all restrictions; the Chief Justice and Justices Kavanaugh and Barrett supported the moderations of restrictions. This case was also notable in that it was Justice Barrett’s first opinion as a Supreme Court Justice.

The dissenting liberal justices would have deferred to the elected branches of government, who have better information regarding the status of the pandemic from scientists and health officials than the judiciary do. Moreover, the Court had not provided any guidance to states regarding which health orders were constitutional and which orders were not.

Notably, all of the justices agreed that the country was in the middle of a national emergency and did not entertain any views that the pandemic was a hoax or downplay its seriousness. Instead, the conservative majority believed that California should give greater consideration of the religious liberties at stake, though the majority disagreed on how much consideration that states should give religious institutions. The bloc led by Gorsuch argued that California was discriminating against religion (intentional or not) while Barrett’s bloc believed some latitude should be given to states during a national crisis.

The Supreme Court’s ruling was consistent with an earlier 2020 case blocking enforcement of a New York order limiting attendance at worship services. California churches alleged that lower courts were not following the precedent set by the high court’s prior ruling. 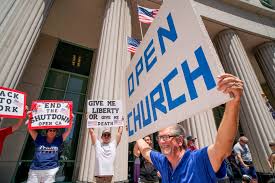 There were a few overriding concerns among the justices. The first issue is whether California is discriminating against religious services by denying them the right to reopen when California was already permitting various other businesses to reopen.

The Gorsuch bloc was concerned that the states were playing favorites regarding which institutions are permitted to open. For instance, California has begun permitting indoor audiences to Hollywood sets and many other businesses are permitted to open their doors with limited capacity. However, churches have a constitutional right to exist while these other businesses are not on equal constitutional standing. The liberal bloc placed greater emphasis on expert testimony that shopping is a less dangerous activity indoor worship because the former involves less close proximity and less time.

However, this expert testimony is uncompelling as health experts are not experts on religious services. Indeed, faith can be practiced in smaller settings with less people. If television studios, book stores, grocery stores, and other businesses can be afforded the opportunity to work around health restrictions, churches should be afforded the same opportunity.

Second, the justices were concerned about the longevity of the pandemic. Indeed, the Gorsuch bloc accused the several states and health officials of moving the goalposts “that always seem to put restoration of liberty just around the corner.” The liberal bloc pointed out that a vaccine has been released and the health experts are the ones who best know the timetable for safe restoration of normality.

However, the duration of the emergency is now into its second year and no one has provided a concrete timetable as to when restrictions will be lessened, if not outright lifted. Although California has released a complex web of rules regarding safe reopening, California should not be given the benefit of the doubt because its rules are complex. If California cannot provide clear rules for health and safety, the burden should be on the state to fully explain what it means. A greater degree of transparency would be appreciated if Californians are asked to sacrifice more time and effort.

Finally, the overriding concern, as it is all constitutional matters, is who gets to make these decisions? There appears to be an unspoken shift among the justice as Justice Barrett’s confirmation sends the Court rightward. The conservative majority now expresses greater concern for individual rights and sees itself as the guardian of religious liberty. The liberal minority is now arguing that six unelected judges are making decisions that ought best be left to the political branches, and therefore, ultimately the voters.

It was only a few years ago that the conservative judges were deeply concerned with “judicial activism.” However, they are now embracing the Court’s power of judicial review to modify health orders as they see fit.

To be sure, the restrictions on religious rights are very serve given the duration of the pandemic and complex reopening orders don’t make reopening any easier. But the sudden reversal in roles between the liberals and conservatives of the court is a troubling herald for the post-Covid world.

Do I Need to Hire a Lawyer If I am Being Discriminated Against Based on My Religion?

If you are being discriminated at work because of your religion, you should hire a local employment attorney for further assistance. An employment attorney will be able to determine whether your employer has acted in a discriminating manner, and if so, can represent you during settlement negotiations or in court if necessary.