In 1918, the world was struck by the Spanish Flu. Sadly, science and medicine were not advanced enough to battle the contagious H1N1 virus, which sickened 500 million people and killed 20 to 50 million victims. The United States saw 675,000 of their citizens die. During that time, the U.S. legal system created a “response” that goes into effect in cases of communicable diseases like the flu.

Under section 361 of the Public Health and Service Act (42 U.S. Code Section 264), the U.S. Secretary of Health and Human Services has the power to take steps to prevent the spread of communicable diseases in the United States. This includes the power to detain, medically examine, and release people who are suspected to have the disease and are traveling between states.

Within state borders, each state government has the authority to enforce isolation and quarantine policies. While these policies may vary from state to state, if there is any conflict between state and federal law then the federal law will override the state law.

Currently, the world watches and waits as COVID-19 spreads from country to country. While there is no reason to think that COVID-19, with a 3.4% mortality rate, is nearly as lethal as the Spanish Flu, with a 10% mortality rate, we can still learn from the laws and regulations that came out of the 1918 pandemic. 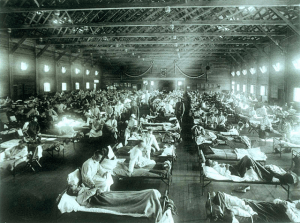 What is the Difference Between Quarantine and Isolation?

In short, isolation is when the individual is confirmed to have the disease and is separated from others who are not sick. Whereas quarantine limits the movement of individuals who were exposed but do not have the illness, in order to see if they develop it and prevent it from spreading just in case.

These terms are often used interchangeably, but there is a small (but key) difference between them that isolation is often used to care for the sick person and to knowingly protect them from infecting other people (including loved ones).

However, quarantine is limiting or confining a person on the chance they may have the illness and can last for days to weeks. So when you quarantine someone, you are taking the risk of public health and weighing it against their personal freedom. If the individual is lucky, then they do not have the illness at all

But does that mean they were forced into quarantine unnecessarily? What happens to the individual’s rights when a pandemic strikes?

How Did the United States React to Previous Pandemics?

The Spanish Flu was the first real pandemic that hit the world since the United States came into existence. But over our long history, the United States saw many illnesses sweep the nation, like cholera, typhoid, and HIV/AIDS.

Typhoid fever is an excellent example of how the U.S. combats communicable diseases. Everyone has heard some variation of the story of “Typhoid Mary.” Mary Mallon was a cook who infected 51 people with typhoid fever (three died) as she was an “asymptomatic carrier.” Meaning she carried an active and deadly strain of typhoid fever but did not show signs of illness.

When it was first discovered that she was a carrier, she already left a wake of infected households. She went on to find a new employer after her previous one would fall ill. In fact, a trail of illness followed her until a typhoid researcher tracked her down. When medical professionals attempted to have her tested for typhoid, she refused until law enforcement came and removed her.

Ms. Mallon was tested while in prison and determined to be a carrier, and was held in isolation for three years on a remote island. However, the New York State Commissioner of Health decided that he could no longer force carriers to stay in isolation. After Ms. Mallon promised not to seek employment as a cook, she was released.

Naturally, she went back to being a cook after a few years of low paying jobs. She changed her name and frequently changed jobs, as she continued to infect her employers. Eventually she found a job as a hospital for women, where she sickened 25 individuals and killed two. They arrested her and she was isolated for the rest of her life until she died in 1938, over three decades after she was removed from society.

Eventually the United States government saw fit to isolate Mary Mallon until the end of her natural life. This ultimately happened because she could not comply with the order that she does not work as a cook. In fact, for Ms. Mallon the answer seems simple: isolate her indefinitely until she either complies with the order or is no longer infectious.

The Safety of the Public Health Will Always Override Individual Liberty

The answer seems obvious, as well as a relief but also troubling. The state and federal government can isolate or quarantine you so long as it is for the sake of overall public health and safety. For people with infectious cases of tuberculosis, this could mean months or even years away from loved ones as doctors try to control the disease that ravages their lungs. For Mary Mallon, this meant that she died in isolation and away from the rest of society.

This may sound like a great idea for those who were not exposed to a communicable disease or are suffering from one, but what if we were the ones looking at an indefinite quarantine?

Like the guests on one of the many cruise ships sailing around the world. If there is one instance of COVID-19, then the entire cruise goes on lockdown and they must wait to see who else falls ill. In Japan, they discovered holding the passengers in quarantine on the cruise only leads to a rapidly growing infection rate.

But many U.S. residents are uneasy at the idea of unloading a ship of ill passengers right on our shores. If we leave them on the ship then their chance of falling ill rapidly increases, but if we let them disembark then aren’t we just putting ourselves at risk?

The truth is that the passengers on those ships are also U.S. citizens who are facing a harrowing situation. What was supposed to be a fun vacation has turned into a living nightmare. They do not want to be sick just as much as they don’t want to get anyone else sick. While we may run the risk, however slim, of infecting more people with COVID-19 by having them brought to shore, we cannot (yet) ignore the fact that they are also members of the public.

Now that COVID-19 Has Reached the United States, What Can We Do?

While COVID-19 is a highly contagious and relatively unknown disease, it is far less deadly than the Spanish Flu of 1918. It is unlikely that we can fear a population loss that we saw in previous epidemics, not just because we have so much more technology available but also because the strain does not seem to be as dangerous.

So what can we do? Be smart and play it safe. Does this mean buying all of the toilet paper and face masks that you can find? Avoiding Chinese restaurants or attacking random Asian-looking citizens? No.

It means washing your hands regularly and effectively. It means not touching your face or going to work or school if you feel ill. It means keeping yourself away from the public and vulnerable individuals who already have weakened immune systems. Some people may want to avoid unnecessary air travel, but others find it to be a great time to go on that dream trip to Europe for a fraction of the typical cost.

You have the right as an individual to make choices that are best for you. However, when situations like a potential global pandemic strike then you may find your individual liberty be severely limited. While it may seem unfair that your freedom is taken in order to benefit the overall public health and safety, remember that you are also a member of the public.

Working together and cooperating with safeguards is the only way we, as a public, can see through this terrifying and surreal experience as a whole.

Previous
« Vanessa Bryant’s Lawsuit against the Helicopter Operators That Flew Kobe Bryant
Next
Are Asians Being Discriminated Against Because of the Coronavirus? »