In a 5-4 split decision, the Supreme Court lifted lower court injunctions blocking the federal government from barring transgender persons from enlisting in the military.

The High Court’s order also allows the current administration to require that military personnel serve as members of their biological gender unless they began prior to the latest executive order. The justices did not issue an opinion with the order lifting the stay.

Although “Don’t Ask, Don’t Tell” – the policy that barred open homosexuals from military service – was repealed in 2011, vestiges of the old policy remained for transgender members.

At the end of 2017, the Trump Administration issued an executive order that rescinded the new policies. Former Defense Secretary James Mattis delayed implementation of the policy so that the Pentagon could conduct a study into the matter. During the study period, several transgender service members filed suit against the administration for rescinding the prior policies. 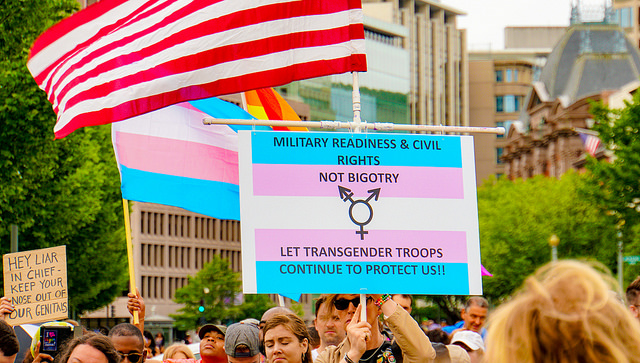 The Transgender Ban is Not Based on Professional Judgment

Trump justified the transgender ban on his Twitter page in part because the military “cannot be burdened with the tremendous medical costs and disruption that transgender in the military would entail.” Estimates put the expenses between $2.4 and $8.4 million per year. That sounds like a large number until one realizes that the military spends about $50 billion a year on healthcare, including $84.24 million on erectile dysfunction prescriptions.

The money that the Pentagon spent on transgender personal needs was only .017% at most. The Defense Department will most likely spend more money defending the ban than if it just let transgender persons serve without issue. If the next Administration reverses the ban, then the resources needed to defend the ban will be for naught.

Given the history of racial and sexual orientation segregation in the military, any kind of ban on military enlistment based on a protected class should be subject to strict judicial scrutiny. Individual situations can be handled on a case by case basis. There is very little reason for blanket bans outside of prejudice and animus.

Preliminary Injunctions Must Remain Unless Executive Power is Reduced

The rule does not impose any geographic limit on the injunction power. The large scope of the power is necessary to ensure that the federal government will not merely move into another state or circuit to circumvent the court order.

The Executive Branch will always complain about the injunction power, regardless of who occupies the White House, because in contemporary times it is the only real restriction on executive orders. The Obama Administration had also complained about preliminary injunctions while its DACA program was in legal limbo.

It is becoming increasingly clear that Presidents will use executive orders when they cannot convince Congress of the wisdom of their agenda. In fact, Trump has relied on executive orders even when his own party held Congress during his first two years in office (both the travel ban and the transgender ban were enacted before Democrats retook the House in 2019).

One of the greater issues in the balance of power between the Executive and other branches is that the President can act before either the Legislative or the Judiciary can stop it. If the President makes a grave error with an executive order, the harm to the nation would already be inflicted before the other two branches can weigh in.

The federal government frames the transgender ban as the military’s right to exercise authority over itself. While the military should have greater autonomy among its own rank and file, it is still subject to civilian control through its elected Commander in Chief.

Since the President is subject to scrutiny by the other two branches, any decisions that the President makes regarding the military is still subject to Congressional or judicial approval. Conservatives might complain about judicial activism and demand respect for executive authority today, but as the fight with DACA shows, those safeguards should remain in place for all Presidents, not just the current ones.