Was It Legal For Michael Cohen to Tape Donald Trump?

The attorney-client relationship requires that the attorney maintain confidentiality unless the client chooses to waive it. Michael Cohen’s tapes of his conversations with Donald Trump raises legal and ethical questions about Cohen and the investigation into the Trump campaign.

On July 25th, Cohen’s lawyer, Lanny Davis, gave an audio recording of Cohen and Trump to CNN, which aired later that night. The tape in question is a September 2016 conversation about a $150,000 payment to Playboy model Karen McDougalv. The tape proves that Trump knew about payments being made to women who allege that he slept with them, knowledge that he disavowed in 2017 and 2018. The President’s lawyers dispute the method that the women were allegedly paid (cash or check) and whether Trump knew about the payments prior to the recorded conversation. 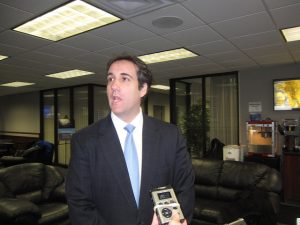 Yes, The Recording was Legal

State laws regulate whether conversations can be recorded or taped. Some states, like California, require that both parties in a conversation consent to recording the conservation. Other states only require one party to consent. New York, where Trump and Cohen have operated for decades, is a one party consent state.

The difference is easy to understand. It is illegal in any state for a third party to record a conversation between two persons without both parties in the conversation giving consent or without a warrant.

The FBI would not be able to legally record Cohen and Trump’s conversations unless one of them consented or unless a judge permitted it. If Cohen and Trump were both in California, both of them would need to give consent prior to any recording being made. In New York, only Cohen had to consent for the recording to be legal.

Attorney-Client Privilege is Necessary to Encourage the Client’s Honesty

In order for an attorney to give accurate legal advice and provide the best legal strategy, the attorney must know everything about the client’s case. There will be cases where the best possible outcome for a client is to settle a case (in civil law) or to plead guilty in exchange for a lower sentence (in criminal law). An attorney cannot make that determination without knowing all the facts. The client is often the first and best source of information, but they won’t provide it unless they feel they can trust the attorney.

Attorneys choose letters over videotapes because the attorney can control the contents of a letter. This can spare both the client and attorney from any embarrassment, such as if the client uses colorful language or to ensure that nothing incriminating is recorded. It also stops any disputes about what was said before the tape, after the tape, or whether anything was edited in or out of the tape.

There are Exceptions to Confidentiality

The attorney-client privilege is a powerful shield, but it is not absolute. To be sure, the client can freely admit to past crimes to his attorney and the knowledge would be confidential. There are two exceptions in this area:

The second exceptions relates to perjury and being dishonesty with the court. The attorney cannot help a client commit perjury or lie to the court, but the privilege would also not permit the attorney to put his client in legal jeopardy. Most attorneys would withdraw from representing the client if he knew for a fact that the client was planning on committing perjury.

Does Trying a Case in the Court of Public Opinion Waive the Attorney-Client Privilege?

The client may waive the attorney-client privilege. There may be some cases where it may be wise to waive confidentiality, so the option is always there. A client may inadvertently waive confidentiality by publicizing the communications with the attorney. In that situation, the waiver may be narrow to protect the client to the full extent possible. In one memorable case, a client attached his emails with his attorney to a court pleading. The opposing counsel tried to subpoena the full case file, but the judge narrowed the subpoena to the emails that were attached.

Trump seems to have foregone the legal battle in favor of fighting in the political arena. Since impeachment is a political process, this seems to be wise move if he remains in office (he may be in for a world of pain when he leaves though).

However, Cohen is revealing the weakness in this strategy. If Trump keeps publicly attacking Cohen, that may be considered a waiver of the attorney-client privilege. If the client goes on social media or television and openly talks about a confidential communication, that communication would no longer be confidential.

A judge should narrow the waiver to conversations that are public knowledge so far, but the President and his current lawyers would be wise to keep their mouths shut unless they want more Cohen tapes dropped on him. Cohen should face disbarment for failing to alert his client to the fact that he was being recorded, but that won’t fix the mess that the President and his men have put themselves in.