The Government Must Stop Giving Drugs to Unconsenting Migrant Children

Federal District Court Judge Dolly Gee ordered the federal government to obtain legal consent or a court order before administering any psychotropic drugs to migrant children. The only exception was for cases of “dire emergencies.”

The judge also ordered the government to transfer most of the children from the Shiloh Residential Treatment Center, where the abuse was occurring. The Shiloh Center has been contracted to house unaccompanied migrant minors since 2013 and has also received children forcibly separated from their parents under the current administration.

The Shiloh Center has been a legal nightmare since it began taking in migrant minors. The Center is a locked facility under 24-hour surveillance. It has been accused of child abuse, physical violence, physical restraint of children, and several deaths of children in their custody.

This year, the Shiloh Center was sued for giving Prozac, Clonazepam, Divalproex, Duloxetine, Guanfacine, Latuda, Geodon, Olanzapine, and other powerful antipsychotics to children without legal consent. Many of many these drugs are used to treat bipolar disorder and other mental health disorders.

The Administration argued that the children given medications were cases of dire emergencies. That argument was unpersuasive to Judge Gee. The children testified that they were given mind and mood altering medication “every morning and every night” without being told what the drugs were or why they were being given.

Most alarmingly, medical and court documents show that the children who are diagnosed with depression and other mental health issues were triggered because they were being kept from family. 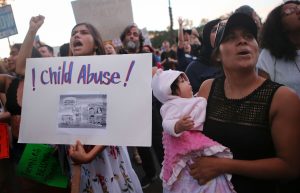 Giving Drugs to Children without Consent is Unlawful Under Immigration Law

The Flores Agreement, which governs unaccompanied minor children, requires that the government to place children in the “least restrictive” setting appropriate to their age and any special needs.

The Agreement was partly codified into federal law by the Victims of Trafficking and Violence Protection Act. Attorney General Jeff Sessions has asked federal courts to repeal the Flores Agreement, but the Ninth Circuit has deferred to Congress to come up with an alternative to the Flores Agreement.

Judge Gee ruled that the Shiloh Center’s practice of forcing drugs onto children is illegal under the Flores Agreement. The Agreement has three provisions:

The Shiloh Center violates the first two requirements. Any children who were forcibly taken from their families must be returned to family without unnecessary delay. Putting the remaining children under 24-hour watch and forcing antipsychotics down their throats is a serious breach of the “least restrictive” requirement.

The Shiloh Center’s conduct would be illegal regardless of the children’s immigration status. Doctors and another medical personal must have their patient’s consent before giving non-emergency care.

Any medical personal who forces medical treatment onto a person without their consent may be liable for medical battery. The patient’s consent must be an informed consent, whereby the doctor discloses all relevant information to the patient, including why a treatment is necessary and any potential side effects.

As Judge Gee correctly stated, children cannot be given medical treatment without consent from a legal guardian or by a court order. In this situation, most of the children are without a legal guardian. However, even if the biological parent is absent, the parent would still retain legal custody. In their absence, family members and authorized programs can serve as legal guardians, per the first term of the Flores Agreement.

The federal government cannot be trusted to be legal guardians for the children. Parents and other guardians of children are to make the best interests of the children the priority when deciding for them.

The federal government has too many competing interests to ever meet the best interests’ standard. The government is making enforcement of immigration law and management of the current public relations disaster its top priority. There is also evidence that Shiloh staff and government officials were more interested in silencing the children than in managing their safety and welfare.

The conflicts of interest are too high for the government to be making medical decisions for the children in their custody. The Flores Agreement must be enforced if the victims are to have any kind of justice.

Previous
« Crisis at the Border: Custody Options after Deportation
Next
Was It Legal For Michael Cohen to Tape Donald Trump? »