The families of the Surfside South Champlain Tower collapse may soon receive their first compensation funds for their losses. A Florida judge stated at a recent hearing that victims’ families will get a minimum compensation of at least $150 million.

The South Champlain Tower was undergoing its 40-year recertification process when it fell. The recertification was set to begin three years after an engineer warned of serious structural issues requiring immediate attention. Most of the repair work had yet to be started. Condo owners differ on what to do with the sit. Some want the structure rebuilt while others want to construct a memorial site.

Miami-Dade Circuit Judge Michael Hanzman stated that the sum would include $50 million in insurance on the South Champlain Towers building and at least $100 million from the sale of the Surfside property. The $150 million minimum does not include earnings from any other lawsuits filed. Those lawsuits are being consolidated into a single class action that would cover all victims and family members if they consent to such an action.

The current death toll from the condo collapse as of this writing is at 97 deaths. The recovery effort is ongoing.

How Are Wrongful Death Actions Compensated? 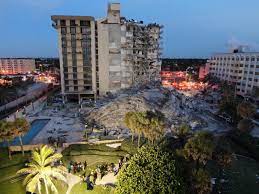 Economic damages are for expenses that the families will incur because of the deaths – i.e. funeral and burial expenses. Future economic damages would include loss earning capacity from having one less income available. For instance, a family of four that lost one of the breadwinners would have to be compensated for the income lost from the time of death and into the deceased’s expected retirement.

Non-economic damages would include emotional distress, pain and suffering, and loss of companionship. These damages are subjective as they are based on the surviving family members’ loss. Although these damages are subjective, they must still within the expectations of a typical case of this type. However, wrongful death suits are often worth the most especially if the deceased is a young child or the parents of a young child.

Previous
« Should Unvaccinated Persons Be Protected Against Discrimination?
Next
Illinois Bans Lying to Minors During Police Interrogation »