Was the Miami Building Collapse Preventable?

In the twilight hours of June 24, 2021, a large section of the Oceanfront Champlain Towers in Surfside Miami, Florida collapsed. Four people have been pronounced dead, with at least a hundred more missing. Witnesses described hearing what sounded like Thunder before a huge cloud of dust went up. The collapse has been compared to the fall of the Twin Towers during 9/11.

The 12-story South Champlain Towers were completed in 1981. It was going through a recertification process as required by city safety regulations when the side of the building suddenly collapsed. A building inspector had been on the roof of the building mere hours before its collapse. The cause is currently unknown. President Biden has approved emergency funds to assist with the relief effort. Governor DeStantis has called for answers even as his state focuses on finding survivors.

A class-action for $5 million was filed against the association of the collapsed condo for failure to secure the structure was filed last week.

Was the Champlain Tower Collapse Foreseeable? 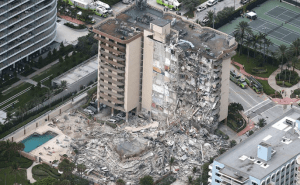 Businesses can be liable for wrongful deaths stemming from the company’s negligence if the accident was foreseeable. In other words, a company can be held liable for actions it didn’t take if it could reasonably foresee that the lack of action would cause the accident. State law may differ on how big a factor foreseeability plays, but most states will include foreseeability as a factor when considering negligence.

Researchers at the Florida International University published a study last year finding that the building had been sinking at 2 millimeters per year since the 1990s. The building was constructed over reclaimed wetland, which experts claim can compact and thus shift over time. Proximity to the sea and recurring ocean saltwater would also undermine the integrity of the structure. However, the study is inconclusive as to whether constructions over wetlands lead to this incident.

Roof work was ongoing until the building’s collapse, but it was unlikely the cause of the incident. Initial engineer inspections of the videos available believe that a column failure may have contributed to the collapse. The building was supported by a series of pillars and a pillar failure would cause everything else to fall.

Any investigation will require a review of records, emails, and reports regarding the structural integrity of the building. Did the engineers, architects, and contractors who constructed the building take the wetlands and ocean water into account? Was this a design defect such that other buildings in the area might need to be evacuated or one off-incident because of a construction defect?

Most significantly though, an engineering consultant named Frank Morabit allegedly warned of ‘major structural damage’ in 2018. Mr. Morabit allegedly advised that the issues he found should be fixed in a timely fashion. It is possible that the structural issues Mr. Morabit identified played a role in the collapse, though a more thorough investigation will be required.

However, now that the Champlain Tower has collapsed, other high-storied buildings should conduct their own inspections to insure that their buildings are safe. While the foreseeability of this collapse may be in doubt, the next building collapse may not have the same excuse.

If a loved one of yours has died because of negligence or wrongdoing, you should contact a local personal injury attorney. They will be able to determine whether you have a valid claim, what the laws of your state are that pertain to the action, and can help you obtain a just compensation.