The East Moline Police Department received a tip in March 2015 that Derrick Bonilla was selling drugs from his upper Illinois apartment. An officer brought a drug-sniffing dog to the three floor apartment building. The exterior door to the building was unlocked. The officer walked the dog past the thresholds of each of the apartments on the second and third floors.

When the dog reached Bonilla’s door, it signaled the presence of drugs. The police allegedly obtained a search warrant based on the dog sniff, though prosecutors failed to attach the warrant to the public record. The police searched Bonilla’s apartment and found approximately 17 grams of marijuana. Bonilla was arrested and charged with unlawful possession of cannabis with intent to deliver.

Most of the state courts, including the Illinois Supreme Court, ruled that a police canine’s detection of drugs outside an apartment door was an unlawful search. Illinois state courts reasoned that since “curtilages,” outside areas around a residence, are subject to the same privacy expectations as the interior of a residence, that the front door of an apartment must have the same expectation of privacy. Dissenting judges in the 4-3 split decision of the Illinois Supreme Court argued that there’s no expectation of privacy in the common areas of a multi-unit building.

Illinois appealed the decision up to the United States Supreme Court at the beginning of 2019. The Court is considering petitions from the parties and an amicus brief from the State of Utah. Four justices must accept the petitions before the Court will hear the case. 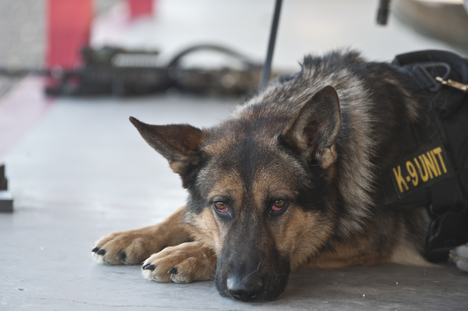 Under the Fourth Amendment of the United States Constitution, all persons in the country are protected against unreasonable searches and seizures. It is black letter law that law enforcement cannot search an individual’s private dwelling without a warrant.

Police dogs are considered searches under the Fourth Amendment. Police must have a warrant before they can use a dog to search a private area, though dogs can be used for unwarranted searches if they are searching in public areas.

The dissent argued privacy protections do not apply to the front door of the unit because the hallways of a multi-unit apartment complex are public areas. This argument draws an unnecessary distinction between multi-unit apartments and other residential areas. The front door of a residential house in a suburb is afforded the same privacy protections as the interior of the house.

Any resident would inquiry why a stranger is standing immediately outside the front door of his or her home and would order that person to leave if no reasonable justification was provided. The front door of a home is not a public area to any reasonable person, regardless of whether the residence stands alone or is part of a larger complex.

Denying privacy protections to front doors of apartment complexes would also create another rift between the country’s economic classes. Americans typically rent apartments when they cannot afford to outright purchase a property. There are also income differences between Americans who purchase condominiums over houses.

The dissent also makes a hasty assumption that the hallways of an apartment complex are public areas. Although the hallways may be public for apartment residents, it does not mean the hallways are public to non-residents. Management and residents may reasonably question anyone they don’t recognize inside the complex.

Police are typically permitted in the common areas of an apartment complex because they have been invited inside by management or a resident, not because the hallways are accessible to the general public.

One of the largest political tensions in modern American is the divide between the urban and rural parts of the country. A judicial ruling that front doors of apartment complexes are afforded less privacy protections would unduly discrimination against city dwellers and people who cannot afford to purchase houses. Courts should be mindful about the impact of their rulings and ensure that the law applies equally to all Americans, regardless of where they live or can afford to live.