Washington D.C. Court Going Back and Forth on Fully Reinstating DACA

It’s been around a year since the Trump administration acted to end Deferred Action for Childhood Arrivals (DACA) and the fate of the program has been a story of back and forth whiplash ever since.

The initial announcement in September of last year saw President Trump giving the ax to the Obama-era program. However, as of writing this article the state of affairs leaves DACA partially in place as a single Washington D.C. court has issued two separate rulings on the matter in the last two weeks or so–the most recent of which coming just last Friday.

For those unfamiliar, DACA itself is a program offering protection to around 800,000 people living in the U.S. It extends certain protections and benefits to immigrants who fulfill an extremely strict set of criteria; not citizenship but it offers deferred deportation, work permits, social security numbers, and driver’s licenses.

These benefits offer those protected, known as Dreamers due to the similarities between DACA and the failed 2001 DREAM Act, the ability to hold a job, receive education, start a business, and even get a house.  The restrictions on who can receive these protections–you must be under 16 when you come to the country, live here non-stop since 2007, never been convicted of a felony or serious misdemeanor, not be a national security threat and have graduated high school or be in the process of doing so–mean that a lot of these Dreamers have lived their whole lives in the U.S. and have no connections anywhere else.

When Trump got rid of the DACA program, it left all these people in a lurch as to where to go–essentially facing a ticking timer on potential deportation and serious potential privacy violations. They had about a month to renew before the Trump administration cut off renewal applications in October. Even then, these renewal applications had several additional restrictions to the point that a lawyer was almost necessary to properly apply.

Given how many people were affected, it’s no surprise the DACA revocation was almost immediately challenged in court. California and New York have had rulings slowing down the matter by ordering DACA remain in place until lawsuits on the issue are resolved. Texas has been pursuing the opposite, with a case looking to bury DACA and all similar laws or policies. The case we will be talking about today, however, has taken place in a federal court in Washington D.C. 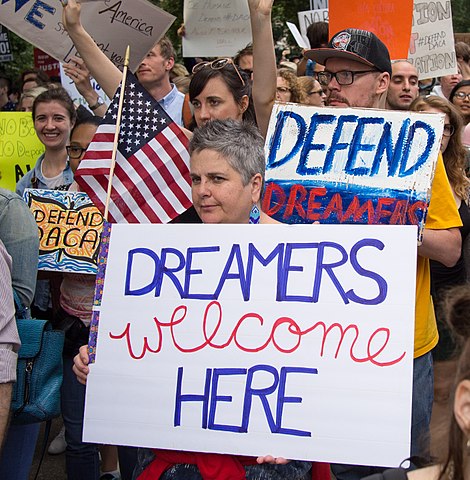 The Initial D.C. Ruling for DACA

In a ruling on April 24th of this year, the D.C. federal court determined that the removal of DACA protections was done illegally under the Administrative Procedure Act (APA). The APA is a law passed in 1946 which provides a means for the courts to review and censure the actions of government agencies.

However, there is a very high standard before a court can say an agency action violates the APA, requiring a court to say that the agency has no reasonable explanation for its decision based on the information it had when it took action.

The government had two or three reasons they provided the court for why they revoked DACA, the primary one being the potential of a lawsuit out of Texas. However, they had essentially no evidence of damage done by DACA at the time they got rid of it and the court ruled they couldn’t articulate a reasonable purpose to get rid of the protections.

This order could have led to a reinstatement of DACA all the way back in April–it initially demanded this within 90 days of the order. However, the court instead put a stay on the DACA repeal–allowing DACA protections to temporarily continue–and gave the government 90 days to convince them they had a good reason for their repeal.

If you do some quick math, you’ll find that this leaves the government out of time around the beginning of this month. This is why there’s been such a flurry of action–the court has decided that the government’s new efforts to show they weren’t arbitrary in their DACA repeal insufficient.

The court reaffirmed that the repeal was arbitrary and capricious. They said that while the Department of Homeland Security has the authority to rescind the DACA program, they had no rational explanation for their decision as required by the APA.

This first ruling gave the government 20 days to consider an appeal but then would have fully reinstated DACA–allowing both new applications and renewals for those seeking protection. This is a step further than any other court had ever gone. The California and New York rulings only required the government to continue accepting renewal applications as opposed to allowing new people to seek DACA protection. However, just last Friday we saw a second ruling out of the same court.

The Second Ruling for DACA

Last Friday, August 17th, the D.C. court amended its ruling to no longer offer the full reinstatement of DACA that had thrilled some and others up in arms. They instead amended their ruling to follow along similar lines to the California and New York courts–requiring the government to process renewal applications but not requiring them to accept new applications. This order will stay in place as long as the government continues to appeal the issue.

The White House Position on DACA is Still Inconsistent

The White House obviously is the source of the DACA repeal. However, at the same time President Trump has repeatedly made statements that he and Republicans in Congress are the true Dreamer supporters.

He has bemoaned the mistreatment of DACA Dreamers but his actions don’t exactly line up with what he’s saying. He’s removed those protections and, while he’s called on Congress to take action on the issue, he’s publically stated in the last few weeks that he hopes the Texas lawsuit on the issue puts the nails in the coffin of DACA.

While he has statements supporting DACA measures in Congress, his actual action pushing such measures is essentially non-existent. Congress has not passed any legislation around DACA and has come nowhere near successfully passing something along those lines.

The attempts have all included substantial riders, elements of the bills such as funding for Trump’s wall in return for minimal DACA protections. Even these efforts have failed to garner conservative support as many conservative members of Congress refuse to support DACA provisions even with such riders.

Where Does This Leave Us?

At this point, Congressional action in the near future seems unlikely. This means that the state of affairs until appeals are completed, something that will likely take years and may well reach the Supreme Court, is likely to be this compromise of allowing renewals for those already in the DACA program but no new applications allowed.

The Department of Homeland Security will certainly appeal this D.C. federal ruling, just as they have already begun appealing the California and New York decisions. Unfortunately, for the foreseeable future Dreamers are going to be in a stressful limbo as this holding pattern leaves them constantly questioning their future in the United States.