Senator Kamala Harris and other presidential candidates are calling for Brett Kavanaugh’s impeachment as new details regarding the FBI’s investigation and Kavanaugh’s nomination process come to light. Although impeachment is unlikely, another disgraced judge in Harris’s home state foreshadows the fate of judges who weigh in incorrectly on sexual abuse cases.

In 2016, a jury found Brock Turner guilty of sexually assaulting Chanel Miller while she was unconscious. The Turner case was notable in many ways. First, two witnesses saw the assault and rescued Miller as it occurred. Second, Brock Turner and his family were unremorseful and unrepentant for the crime. Turner’s father famously stated that it was unfair for his son to serve any time in prison because of “twenty minutes of action.”

The Turner case is also notorious because the presiding judge in the case, Aaron Persky, only sentenced Turner to six months in prison. Turner was released in three months for good behavior. In response, Santa Clara County voters recalled Judge Persky in 2018. Mr. Persky found a job this year as a JV tennis coach for Lynbrook High School in San Jose.

Public outcry followed Persky again and school officials terminated his employment before Persky’s official start date. Persky’s timing was especially poor as Chanel Miller had decided at the same time to shed her previous anonymity in order to publish a memoir about her ordeal.

School officials claim they were initially unaware of Perksy’s role in the Brock Turner case when they hired him. To be sure, Persky was completely qualified for the job. He had successfully completed all of the District’s hiring requirements, including a fingerprint background check, attended several coaching clinics for youth, and held a high rating from the United States Tennis Association. Nevertheless, the school district decided that the controversy over Perksy’s role in the Turner case warranted his early dismissal. 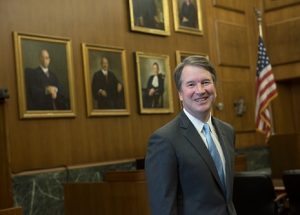 The Difference (and Similarities) of Persky and Kavanaugh

To be sure, Persky and Kavanaugh have two very distinct fact patterns. Persky was never accused of behaving inappropriately himself. Persky’s folly was appearing empathetic with a man who had just been convicted of sexual assault.

Although Miller herself did not recall the assault, two witnesses had caught Turner in the act. Instead of taking into account how the proven assault would impact Miller’s life, he expressed sympathy for the assailant and how the conviction would impact Turner’s life.

On the other hand, Kavanaugh was personally accused of assaulting Christine Ford and exposing himself to Deborah Ramirez. Kavanaugh apparently does not recall any details –it either never occurred or he was too drunk to remember because he loved beer – while his alleged victims remember almost every moment.

Like Turner though, Kavanaugh demonstrated no sympathy and no remorse towards the alleged victims or the charges. To be sure, Kavanaugh has every right to deny the allegations. However, Kavanaugh and the White House that supported him allowed the national conversation to be overly dismissive about the nature of the charges itself.

Whether Kavanaugh assaulted Ms. Ford is in doubt, but there should be no doubt that sexual assault itself is a serious crime. Kavanaugh’s decision to cast himself as the victim of a Clinton conspiracy was unsupported by any facts and thus has harmed not only the legitimacy of the Supreme Court, but also the safety of women throughout the country.

Dismissing and disparaging sexual assault allegations allows men like Brock Turner and Aaron Persky to ignore the very real pain and suffering of women like Chanel Millerwho have been assaulted.

The tragedy is that both Kavanaugh and Persky have been wrongfully adjudicated. All public officials, including the President and Supreme Court justices, should be held accountable for their actions. At the same time though, judges must retain a certain degree of independence in order to make decisions that are legally correct, even if such decisions are unpopular.

The proper line between independence and accountability is whether the judge was acting appropriately within the boundaries of their offices versus judges who have conducted themselves in a manner that is utterly inappropriate for any judge at any level of the judiciary.

The evidence is inconclusive as to whether Kavanaugh actually assaulted Ford. However, Kavanaugh blaming a retired politician who had no connection to him or Ms. Ford was completely inappropriate and unbecoming of a Supreme Court justice.

As a judge, Kavanaugh is required to weigh the suffering of sexual assault victims against the punishments of criminal defendants, if such cases come before the Supreme Court. Kavanaugh showed in his confirmation hearing that he is completely unable to make such decisions in an objective and neutral manner. The Senate utterly failed to hold Kavanaugh accountable for his personal conduct.

In contrast, Persky was overly punished for making a decision that he was well within his power and right to make. Turner’s six-month sentence was far too short for a man who seemly failed to acknowledge that he had committed such a serious crime.

However, California law at the time permitted Persky to give the sentence that he did. The public had every right to be outraged at the sentence that was given, but the appropriate remedy was to change the law. California did just that when former Governor Brown signed AB 2888 into law, thereby raising the mandatory minimum for sexual assault and rape convictions.

Santa Clara County went too far in attempting to remedy the situation. Persky never should have been recalled even though he made one of the worst rulings in California history. Judges have the right to give the sentences they make as long as they weigh the factors involved.

Persky gave too much weight to the fact that Turner was a first-time offender and his personal history while overlooking Miller’s own circumstances. Nevertheless, he had the power to make that decision.

Judges should not have to worry about being recalled and winning elections when they sentence criminal defendants. The Eighth Amendment requires that punishments be proportional to the crime. Judges that worry about public reaction to their sentences may go overboard with their sentences. To be sure, judges that give sentences that are too light should also be avoided.

As stated above though, the appropriate solution was to amend the law. Justice is best promoted when the legislature acts within the system of checks and balances to enact new policy to prevent outrageous rulings.

The Right of Private Discrimination

Although the government must abide by the Constitution’s system of checks and balances, the general public has no such restrictions. Persky could be fired from any private organizations that have concerns about his judgment.

Most coaches for JV girl tennis teams are mandatory reporters. In other words, if the coach reasonably suspects that a minor is being sexually abuse, then the coach must report the alleged abuse to law enforcement. A judge that seemly identifies with a convicted rapist might not be able to fulfill said duties.

Private persons have every right not to associate with judges they disagree with, even if said judge is currently holding office. Discriminating against judges is not discrimination on the basis of a protected class and thus is not illegal.

However, this rule would only apply to private persons. Public organizations like Lynbrook High School cannot attack a sitting judge as it would be an infringement of the separation of powers, though former judges would not have been effected as they would not be part of the judiciary anymore.

In other words, public schools like Lynbrook High School would not be able to deny even the volunteer services of Kavanaugh as it would be an attack on the judiciary branch by another branch of government. Lynbrook High School was completely within its right to terminate Aaron Persky even if Persky was wrongfully recalled for completely botching Turner’s sentence.