“You don’t know me, but you’ve been inside me, and that’s why you’re here today.” – Emily Doe

Some people don’t know when to quit when they’re ahead. Brock Turner only received a six-month jail sentence, three years of probation, and a sex offender status after being convicted of sexually assaulting an unconscious woman. Despite the lenient sentence, Turner filed a 172 page appeal demanding a retrial.

Turner alleges that the trial was prejudicial because the prosecutor incorrectly told jurors that the sexual assault occurred behind a dumpster instead of a three-sided trash bin, Turner was not allowed to introduce character witnesses, and Judge Aaron Persky did not instruct the jury that it could consider lesser charges. 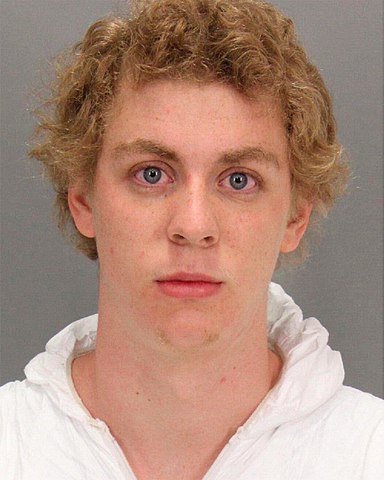 On January 18, 2015 Peter Lars Jonsson and Carl-Fredrik Arndt were bicycling around the Stanford campus around 1:00 a.m. when they found Turner behind some trash bins on top of an unconscious and half-dressed woman. When the pair confronted Turner, he got up and ran. While Jonsson chased after Turner, Arndt stayed with the victim until other bystanders contacted police and emergency services. Arndit joined Jonsson in restraining Turner until the police arrested him.

The victim – identified only as Emily Doe – did not become conscious until three hours after the incident. Emergency personal testified that she had not responded to a “shout and shoulder” test. When Emily Doe woke, she did not recall being alone with a man and did not consent to sexual activity. She was covered in bruises and dried blood. Medical personal testified that she had experienced significant trauma, including “penetrating trauma.”

At trial in March 2016, Turner admitted that he penetrated her vagina with his fingers, but denied engaging in sexual intercourse with her. His primary defense was that both of them had been drinking beer while they were dancing and kissing. Turner alleged that Emily Doe had slipped behind a wooden shed as they were leaving together. Turner testified that he got down on the ground with her and began performing sexual acts with her consent before Jonsson and Arndt found them.

The jury convicted Turner of three felonies, including assault with intent to rape an intoxicated woman, sexually penetrating an unconscious person with a foreign object, and sexual penetration of an intoxicated person.

Three Reasons Retrial Would Be a Mistake for Turner

Retrial would be a big mistake on Turner’s part, both legally and politically. Politically, now would be the worst possible time for a sex offender to seek a retrial. With the #MeToo Movement in full swing, people across the nation are more sensitive to sexual assault charges than ever before. Indeed, the recall campaign against Judge Persky has drawn comparisons to Turner and Donald Trump, another figure that many in Santa Clara County believe has been rewarded despite numerous sexual allegations.

Legally, Turner’s appeal doesn’t make strategic sense. The difference between a dumpster and a three-sided trash bin is not significant. Whether Turner was hiding his alleged crimes would not impact the main elements of the charges against him. Turner could have been engaging in sex acts with Emily Doe at high noon in the middle of the street and it wouldn’t impact the charges against Turner because she was unable to give consent.

Turner wants his friends and family to testify about what a good person and athlete he is. This would be a terrible idea. First, the public was already unsympathetic when his family attempted to defend his honor. Social media condemned Turner’s father when he said that his son was being harshly punished for “twenty minutes of action.” Turner’s family and friends are likely as tone-deaf as he is and their testimony would make Turner less sympathetic.

Second, the prosecution is barred from introducing negative character evidence unless the defense uses character evidence first. After Turner was arrested, police searched his phone. They found photos and text messages involving alcohol and illegal drug use (Turner had previously testified that the party he was found outside of was his first time with alcohol or drugs).

Police also found alleged photographs of the victim’s breasts sent to various group chats and evidence that other women had rejected Turner because they were “creeped out” by his advances. Most of this evidence was kept out of his trial because they did not involve Emily Doe. Using character evidence in a second trial would allow the prosecution to use the character ammunition they saved from the first trial.

Additionally, many believe that Judge Persky favored Turner because Judge Persky had been a Stanford athlete like the defendant. A second trial and guilty verdict would subject Turner to the new mandatory minimum that his first trial had created. It is also likely that the second trial judge would punish him harshly to avoid the public outcry (and possible recall campaign) that Judge Persky now finds himself in.

If Turner doesn’t want a tougher sentence, he would do well to leave Emily Doe alone. Turner has hurt her enough.