What Happens When the Hospital Sues for Unpaid Medical Bills?

The cases that the hospital pursues are not small, but many appear to be frivolous to those billed. Carlsbad Medical Center has billed for as much as $6,000 for treating the flu, though no drugs or surgical procedures were required. The hospital’s collection efforts are also as belligerent as any debt collector. Their attorneys have obtained wage garnishment orders and mortgage liens if they prevail.

The center claims it only files a lawsuit as a last resort if patients fail to respond to their communications. Their staff is happy to explain the breakdown of the expenses and to negotiate the total bill down.

Additionally, the hospital has implemented a new policy whereby it will no longer sue patients who earn below 150% of the federal poverty level and release current court judgments against patients who currently have that level of income, or an individual who makes less than $19,000 annually. If a patient is uninsured, the hospital will also reduce bills to about the equivalent of the reimbursement the hospital receives for Medicaid patients. 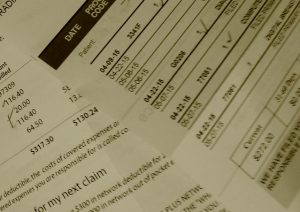 Healthcare: A Chain on the Middle Class

The troubling aspect of this story is that many of the people Carlsbad has sued are insured and make a decent living wage. Some insurance plans have high deductibles, which mean they must pay as much as $7,000 first before their insurance will begin to cover costs. However, for patients who make a living as a teacher, waitress, hotel manager, or other median wage jobs, even that deductible can be crippling in and of itself.

As is the case with healthcare, the service provided is unavoidable. A pregnant woman suffering from a miscarriage or a child having an asthma attack cannot avoid going to the hospital, especially when hospitals like Carlsbad are the only ones in the local vicinity. Hospital bills are still high enough to be a burden on wage earners, but insurance still can’t (or won’t) cover the bills.

Of course, nurses and doctors have a right to be repaid for treating their patients. Medical supplies and training do not come cheap. However, Carlsbad is the only hospital in the vicinity. If there’s an emergency and/or if the patient is unconscious, Carlsbad may be the only option. With a geographic monopoly on a vital service, prices can be arbitrarily set with no consumer choice.

How to Avoid Debt Collection

Lawsuits are a poor vehicle for collecting debt. Although lawsuits unlock powerful tools for the creditor, including wage garnishment and mortgage liens, they are also very expensive. Attorneys can bill between $100and $200 per hour and even a simple action of debt collection on medical bills with no opposition can take at least ten to fifteen hours. Even after filing a lawsuit, the case may still settle for half or three-fourths of the original collection amount.

Of course, debt collection suits are not a picnic for the defendant either. If the action is successful, the debtor may have their paychecks deducted or their properties leveraged. Even if the action does not result in a wage garnishment order, the lawsuit would damage the defendant’s credit score and make it more difficult to purchase or rent property. Both the medical provider and the patient have incentives to avoid litigation altogether.

Carlsbad Medical Center is likely truthful when they claim that lawsuits are their last resort. Paying attorney fees would severely cut down on the amount they could recover by filing a lawsuit. Many patients would be better off dealing with the hospitals representatives early on for a discounted price rather than attempt to settle a wage garnishment action after it’s been filed in the courthouse.

What is Fair Debt Collection?

If you are faced with debt collection action, you should be aware of your rights as a debtor. First, debts are ultimately based on a contract and all states have a statute of limitations for breach of contract. That means the creditor must file their lawsuit within a set number of years or waive their right to pursue legal action for the debt.

Second, debtors have certain rights under both federal and state law. For instance, medical debt collectors must contact the employer and determine if they can recover the debt from the employer’s health insurance provider before they can seek a wage garnishment order.

All debt collection actions are rooted in a lawsuit, so hospitals and their representatives cannot assert a wage garnishment order with the employer absent a court judgment. If you believe that you have been the victim of unfair and deceptive business practices, you should consult a consumer rights lawyer, who may be able to help you recover financial compensation

Previous
« Husband to Pay Spousal Support After His Wife Was Charged With Bigamy
Next
Could Chanel Miller and the Brock Turner Case Foreshadow Brett Kavanaugh’s Fate? »