Divorce can be very expensive especially if you weren’t supposed to marry your spouse in the first place.

Mark Athans married Charity Parchem in August 2017. Soon thereafter, their marriage began falling apart due to “financial irregularities.” Athans soon discovered that Parchem was married to at least two other men at the same time.

Athans filed for divorce in Montgomery County, Texas, five months after their marriage. Parchem herself was indicted on bigamy. Court records show Parchem was married three times before Athans, but she had only filed one divorce.

Athans and Parchem finalized their divorce in a settlement, but the agreement requires Athans pay $96,000 in spousal support to his ex-wife. Athans has asked the Court reconsider the divorce agreement in light of Parchem’s bigamy charge.

However, Judge Patrice McDonald refused to consider the charge in her ruling to uphold the settlement. Even if Athans were to file an appeal, he would still be required to pay $3,000 a month in spousal support while the appeal is pending. 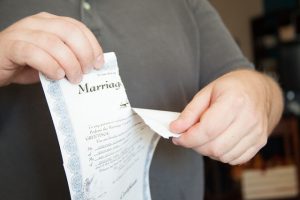 Do You File for Divorce If Your Marriage Wasn’t Valid?

The oddest part of this story is that Athans filed divorce at all. If a marriage is fraudulent or a sham, the marriage should be annulled. Divorce ends a marriage while annulment voids the marriage altogether, as though the marriage had never existed in the first place. If your marriage is annulled, you can legally testify under oath that you were never married to that person.

The legal consequences between a divorce and an annulment are especially important for ex-spouses. Spouses have a legal duty to care for each other. This duty potentially extends beyond the end of the marriage itself, especially if one spouse relied on the other for financial support.

As a result, a divorce may trigger an obligation for the higher earner spouse to pay spousal support to the spouse who earned less during the marriage. However, an annulment would not create a duty to pay spousal support. An annulled marriage means the parties were never married at all and thus no spousal duty of care would exist at all.

A marriage is void if it was not legally valid to begin with. Marriages are usually void because they violate one of the basic tenants of marriage – two people only in one marriage. Polygamy, or group marriage, and bigamy, being married to multiple people at once, are both grounds to annual a marriage because the marriage would be void under the law.

Athans likely made a tactical error by filing for divorce instead of annulling the marriage. By filing for a divorce, Athans inevitably triggered all the legal duties that come with a legally binding marriage. Even more confounding, Athans participated in the entire divorce process and proceeded all the way to a settlement before raising the fact that his wife had been a bigamist since the day they eloped.

In theory, a void marriage should be grounds for an annulment regardless of whether the parties properly raise the issue. A void marriage is contrary to the public policies of the state and so the court should have the ability to terminate it on its own volition.

At the same time though, the marriage, divorce, and marital settlement agreement are all voluntary. It is not fair that a man could get married, get divorced, and agree to pay spousal support only to back out at the end.

Furthermore, Parchem was only charged with bigamy – she hasn’t been convicted yet. Since Americans are innocent until proven guilty, it would not be just to void an agreement based on a conviction that hadn’t been made yet. If the Court must set aside the agreement later on, Parchem can be ordered to reimburse Athans for the spousal support obtained.

Previous
« Should Women Be Able to Go Topless in Public?
Next
What Happens When the Hospital Sues for Unpaid Medical Bills? »