The images and video of children crying as they are torn from their families at the border, images of those children at child-only detention camps, have started a political firestorm on the issue of where and how the U.S. government detains immigrant children.

The issue has been dropped squarely at the feet of President Trump after his zero-tolerance policies heightened the issue beyond the problems child detention has created for decades. When faced with this, Trump stated that changing the policy of separating families was something that had to be done by congressional action. Now, days later, he has signed an executive order ostensibly to end the separation of immigrant families.

This didn’t come out of nowhere; the Trump administration has been under enormous political pressure to make such a move after the disturbing images of crying children made the rounds in the media. However, the new order, titled “Affording Congress an Opportunity to Address Family Separation,” is not so much a solution to the problem as the president has made it sound.

Instead of detaining children separately, they will be detained with their families for an indefinite period–something which the government is not allowed to do under something known as the Flores settlement. The order also does nothing for the over 2,000 children separated from their children under the administration’s zero tolerance policy.

The legal status of the executive order is currently murky. It already faces lawsuits and there are questions over whether the president even has power to take this sort of action. Let’s look at the situation, the Flores settlement the administration is blaming for “forcing” them to separate families, the lawsuits over the executive order, and what the future likely holds on this issue. 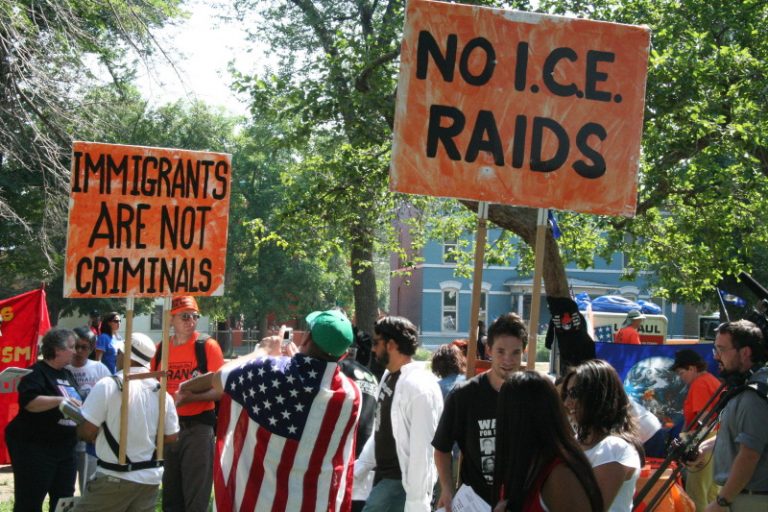 What is the Flores Settlement?

In order to understand the executive order, it is first necessary to understand the government settlement which has been targeted as the cause of separating the families of illegal immigrants. The part of the settlement which the Trump administration is discussing is a requirement under the settlement to turn over unaccompanied alien to the Department of Health and Human Services (DHS). Their accusations are true, but are very much a half truth. The Flores settlement does more than just this, and is in place for very good reason.

Back in 1997, the now defunct Immigration and Naturalization Services (INS) was caught keeping unaccompanied children of immigrants for long periods of time with no beds, little food, and unreliable access to clean water.

To simplify the Flores settlement quite a bit, the rules can be boiled down to essentially two things. First, the government must release unaccompanied children to a close relative or friend of the family without unnecessary delay–courts have placed the time period the government has at around 20 days.

Further rulings have determined that this 20-day requirement applies to both accompanied and unaccompanied minors. Second, the government must keep any unaccompanied alien children in the least restrictive conditions possible if they are to be kept in custody.

According to the Trump administration, it was this first requirement which led them to separate families in the first place as they could not hold the children as long as their parents. It also includes details of the sorts of conditions these children may be held in.

Flores could be superseded by DHS regulations or congressional framework at any time. It wasn’t meant to be a law, it just so happens that the government hasn’t bothered to make a law or rule to adequately replace (as required by the settlement) it in the just over two decades since the settlement was reached.

As it is, the Courts have ruled several times–as recently as July of last year–that the conditions that unaccompanied children are being held in does not live up to the Flores requirements.

The most recent ruling involving evidence of children (some as young as nine-years-old) held in prison-like conditions, often for over a year, with no bond redetermination hearings. The children were threatened with pepper-sprayed, kept in cells so cold they were referred to as “iceboxes” with only a sheet of aluminum foil for warmth. The cells had cement benches with mattresses on top as beds.

The children sometimes went without working toilets or showers. The 90’s case that gave rise to the Flores settlement saw as many as 100 children kept in a single cell with very little food and water and no education or recreation time. These children were held as leverage to convince parents to turn themselves in for deportation.

Despite what the Trump administration is saying, the Flores settlement is there for a very good reason. If you’ve seen the pictures of the child detention centers that have been recently released, you know that the conditions are still far from fantastic. What’s more, the government has repeatedly been caught failing to follow even the barebones provisions of the Flores settlement.

It’s perhaps no surprise that the Trump administration is blaming the Flores settlement. They have attempted to do away with its provisions in court already and were roundly defeated in their efforts.

Previous administrations have made a practice of mostly releasing whole families when the 20 day Flores limitations come up, the Trump administration’s zero-tolerance policy changed this and led to the separation of families and the argument that the Flores settlement left them no choice but to do so.

However, the pressure over the separations led to this recent executive order. Unfortunately, the order includes much less action than the conversation around it would implicate.

The order says that the administration will continue to prosecute illegal immigration as it has. However, they will attempt to find facilities where families can be detained together–something that they explicitly cannot do as the order imagines under the Flores settlement.

The order outlines details for how and when children would be detained with their families, and pledges to “take all legally available measures to provide to the Secretary, upon request, any existing facilities available for the housing and care of alien families, and shall construct such facilities if necessary and consistent with law. ”

Notably, under Flores it is very possible that there are essentially no legally available methods to do this which means this executive order promises to do nothing.

More than anything, the order chastises Congress for failing to solve the problem the administration created here by replacing the Flores settlement with a legislative answer. The order also requires Jeff Sessions and the Justice Department to immediate file a request to modify the Flores agreement.

Lawsuits Springing from The Executive Order

The filings required under the executive order have already gotten underway. The Justice Department is making a request of the Federal District Court Judge in charge of the Flores settlement, Judge Dolly M. Gee, to change the terms of the settlement to allow for detention of children for longer than 20 days if they are with their parents.

The Justice Department has described the issue as the Judge deciding whether to separate children. However, this is disingenuous, there is a lot more to the Flores order than just detention rules. What is really being asked is for Judge Gee to allow indefinite detention of children. This will avoid splitting families, but obviously has different issues.

On the flip side of this coin, the Governor of New York-Andrew Cuomo-is bringing a lawsuit challenging the constitutionality of the executive order.

They are arguing that the right to due process trial, a right held by both citizens and non-citizens under our Constitution, and efforts to detain these children-with or without their families-for months and years without bond or trial is unconstitutional. Beyond that, the lawsuit alleges what we’ve already discussed. The executive order has no real impact unless the Flores settlement were overturned.

What Can We Expect in the Near Future?

As of now, if read as a valid order, Trump’s most recent order accomplishes essentially nothing besides telling the Attorney General to try and undermine Flores for the second time in this presidency. What’s more, on a practical level, the over 2,000 detained children have seen no change yet.

The best they could hope for is being detained with their parents as opposed to by themselves. It’s not even clear under the order when or how the detained children would be reunited with their parents. What’s more, if legal proceedings were expedited to try and fit in the 20-day limitations it would make actual due process nearly impossible. This was attempted in 2014 under the Obama administration and was generally described as a disaster, there was nearly no time available for each asylum claim.

Barring a quick ruling in the AG’s filing with Judge Gee, unlikely and extremely concerning were the Flores protections removed entirely, the most immediate changes we could expect to see would all come from Congress.

There is already a proposal on the issue before the House, although it has been given a grim prognosis in terms of passing. This is separate from the other immigration laws before the House this last week, one more conservative and one more moderate.

The former has already failed to pass the House, having demanded $25B for Trump’s wall in exchange and other cuts in legal immigration in exchange for Dreamer protections, and the second has been delayed to likely be voted on this week.

The longer the inaction on the issue continues, the longer these thousands of children will be held away from their families. The sheer amount of time these children, and their families for that matter, are held while waiting on trial or resolution of their cases is an embarrassment to our country’s due process rights. The time has come to address this on a Congressional level. However, it remains to be seen if the government will take conclusive action on the protections of the Flores settlement.