About a week ago, Judge Alsup out of San Francisco granted a temporary injunction in a case challenging the Trump administrations repeal of the Obama administration’s Deferred Action for Childhood Arrivals (DACA) program. Last September, President Trump had announced his administration would be rescinding DACA, a position that drew intense debate and ultimately led to lawsuits challenging the change.

DACA itself put rules into effect which were very similar to those originally proposed in the failed 2001 DREAM Act, thus leading to many recipients of DACA protections being known as “dreamers.” To summarize DACA, it essentially opened the door to immigrants who fell within a narrow set of restrictions to defer deportation proceedings while under DACA protection and get the paperwork in order (work permits, social security numbers, driver’s licenses) which would allow them to get a job and an education within the U.S.

Who Qualifies for DACA?

To qualify, immigrants needed to be under 16 when they entered the country, have lived in the country nonstop since 2007, be under 36 years old, have or be in the process of getting a high school degree or equivalent, have no serious crimes on their record, and more. DACA did not provide citizenship to these immigrants, but rather simply offered lawfully present status. However, even with these strict requirements and no actual citizenship on offer, the DACA program provided protection to nearly 800,000 people. Many of these people now have businesses of their own, serve in our military, and more.

What is President Trump’s Position on DACA?

President Trump’s repeal took DACA protections off the table and prevented further protections from being granted as of a few months back. It also had the potential to eventually simply strip the protection promised by the federal government entirely.

Trump’s position on it has been a bit odd. Despite his hardline stance on immigration in his campaign, he has occasionally come out in support of DACA only to take a total 180 on the issue days later. In the very month he repealed DACA he tweeted: “Does anybody really want to throw out good, educated and accomplished young people who have jobs, some serving in the military? Really!”

Even in more recent discussions on the topic, Trump has been reported as asking lawmakers if there was “anybody here not for taking care of the DACA recipients.” Trump’s positions tend to generally be very harsh on both immigration and immigrants, so these statements have seemed more than a bit odd. 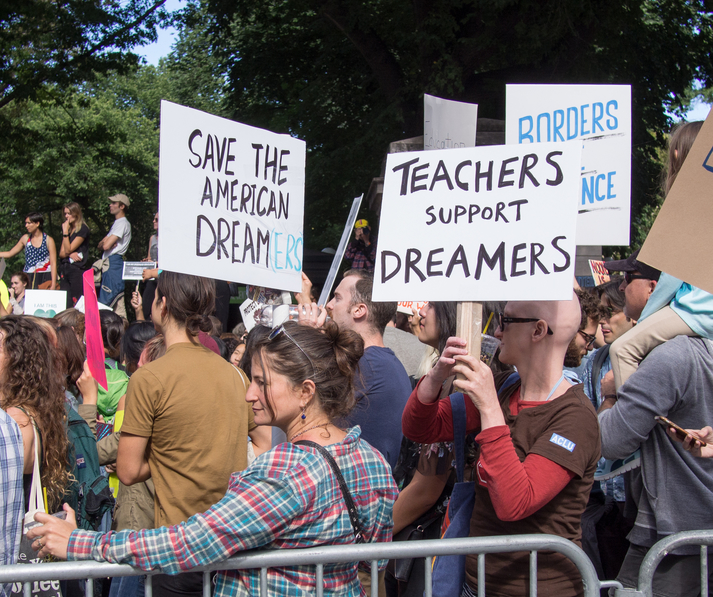 Regardless of Trump’s statements, his actions have moved to kill its protections. These moves led to lawsuits challenging the appropriateness of this action in many different federal courts and from many different plaintiffs. One of these exact lawsuits is the one Judge Alsup ended up ruling on.

The lawsuit in question challenged the repeal of DACA using claims under the Administrative Procedure Act, essentially alleging that the repeal of the program was done arbitrarily and without proper planning or following proper legal procedures.

As an injunction ruling, the plaintiffs needed to show Judge Alsup that they were likely to ultimately succeed in their arguments that DACA was ended arbitrarily, that the harm of ending DACA was greater than the harm to the government of continuing it, and that public interests were in favor of continuing DACA. Judge Alsup ruled that plaintiffs had established all of this.

Immigration is a topic that falls squarely in the powers of the executive. However, the APA requires that an action be set aside if it is done “without observance of procedure required by law.” Some changes which do not represent general statements of policy require a notice and comment period before changes are put in place. Due to the substantial impact on those outside the agency, everybody who has received DACA protection over the last 5 years, the Judge determined that this was a case that likely merited a notice period before taking action and was properly judiciable even though the topic was one historically within the power of the President to effect change on.

In discussing the issue, Judge Alsup pointed to the Trump Administration’s odd approach to the topic of DACA. The fact that Trump had tweeted the same night as it was repealed that he wanted Congress to make a permanent version of DACA or he’d revisit the issue in six months. He pointed to the tweets Trump had previously made on the topic. According to Judge Alsup, this supported the assertion that it was likely the Trump Administration had reached their decision based on a flawed legal premise, a situation which legally makes the action arbitrary for APA purposes.

The Judge also pointed to substantial research, court rulings, and administrative rulings made supporting it and the benefits of DACA over the last five years and earlier. The court also noted factual errors in arguments presented by the Trump administration criticizing DACA and supporting appeal. The ruling also questioned the Trump administrations arguments that DACA was put in place illegally in the first place, pointing to numerous rulings and legislative history supporting the executive’s power to do this. All this taken together was used to rule that it was likely that repealing it was arbitrary.

The Court also pointed to Trump’s occasional support as part of its arguments, along with the many benefits DACA provided to immigrants and others, that public interest favored an injunction for the repeal. The Judge also felt that there was serious harm to DACA recipients if the repeal continued as planned before litigation was completed, arguing that “DACA gave [immigrants] a more tolerable set of choices, including joining the mainstream workforce…Now, absent an injunction, they will slide back to the pre-DACA era and associated hardship.”

The final ruling on the matter has barred the Trump administration from ending DACA completely. However, it is not a total stop on the DACA repeal. The ruling allows the government to continue denying DACA recipients the right to return to the U.S. from abroad and does not require them to accept new applicants. They do, however, must resume accepting DACA renewal applications. This is still a huge move, it potentially forestalls deportation for hundreds of thousands of dreamers.

The Broader Political Picture and This Case Moving Forward

As of now, the Department of Homeland Security has taken essentially no action on making a move to begin following the changed guidelines of Judge Alsup. In fact, their website still has a statement in big red letters exclaiming “DACA is ending.”

This is perhaps no surprise as the Trump administration has already begun their appeal process. They’ve begun the appeal to the 9th Circuit Court of Appeals and have additionally taken the relatively rare step of petition the Supreme Court to preemptively intervene on the issue. The Supreme Court may or may not choose to hear this case before the 9th Circuit. However, they usually wait for the action of the appeals court.

The lower courts are also continuing to hear similar cases on the issue which the Supreme Court may choose to let play out before making a move on the cases. Just last Friday, Judge Alsup made another ruling in a related case saying that it was plausible that the Trump administration had acted to end the DACA program based on racial animus towards the Latino community.

The ruling also comes at a politically inconvenient time for the Trump administration. It came alongside ongoing negotiations and discussion between Trump and both sides of the aisle in Congress on how to proceed on it from a legislative standpoint. These discussions go over how to, how much, and whether to extend some sort of protections to the young people DACA originally sought to protect.

Just last week, Trump told Congress he would support protecting dreamers, potentially even opening a pathway to citizenship, in exchange for support in funding his wall and moves to end sponsorship programs bringing family members of immigrants to the U.S as well as several visa programs. The issue is obviously very contentious between Republicans and Democrats as is, this ruling has thrown an additional question mark as to the leverage of the Trump administration in these negotiations.

This is one of many rulings to come and far from the final word on even this case. However, it is a precursor to a much larger discussion on immigration law that will unfold over the next year. As it is, it is good news for DACA dreamers looking to renew their status. However, it is far from the clean DACA Act these dreamers would hope for to take them out of limbo and far from the crackdown DACA opponents would want. As the case develops, we’ll have to see who ends up with cause to celebrate.

Previous
« Why is it Legal to Pay Intellectually Disabled Workers as Little as Two Dollars a Day?
Next
Veterans Affairs Faces Lawsuit From Veteran Over Scalpel Left in Body After Surgery »