The FBI is engaging in a nationwide manhunt for participants in the Storming of the United States Capitol on January 6, 2021. Each branch of government was challenged by the attack. The legislature was under actual assault. The rioters were attempting to elevate their own judgment about the election over the judiciary’s numerous rulings. The attack was also an assault on the executive branch. The rioters sought to prevent the certification of the results of the 2020 Presidential election, an attack on the incoming Biden administration.

Ironically, the siege was also an attack on the outgoing Trump administration – the insurrectionists had intended to assassinate the sitting Vice President, Mike Pence, the other half of the Republican ticket in 2016 and 2020. The defendants face a number of different charges that range the spectrum of potential charges. The FBI and the DOJ have stated they intend to charge the most obvious ones first and work their way up to the most severe crimes. 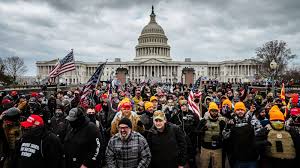 Felony Murder – US prosecutors could charge the rioters with the murder of Capitol Police Officer Brian Sicknick, who died from injuries when rioters repeatedly hit him in the head with a fire extinguisher. Felony murder occurs when a victim is killed in the commission of a felony. All participants and associates of the felony can be charged with the murder.

For instance, the getaway driver of a bank robbery could be charged with murder if his associates kill a security guard during the robbery even though the driver did not pull the trigger and wasn’t even in the building.

Theft of Government Property – Anyone who removed property without consent can be charged with larceny. One man who stole a letter from Speaker Pelosi’s office alleges that he left a quarter for her. However, as the letter was not for sale, “paying” for the property taken is not a defense.

Sedition – Overt conduct inciting rebellion against the United States government. Sedition is rarely prosecuted in America because of the First Amendment.

Violent Entry – Most participants of the Capitol storming will be charged with violent entry, known in other jurisdictions as unlawful entry. As the name suggests, violent or unlawful entry constitutes entering a property without the consent of its owners. Unlawful entry is often an element of greater felonies, such as burglary.

Disorderly Conduct – Disorderly conduct involves behavior that is done in a public area and creates a threat or disturbance to persons in the area. Such conduct may include loitering, reckless behavior, and violation of noise ordinances.

Illegal Firearms – Firearms are expressly prohibited on capitol grounds due to prior assassination attempts on members of Congress. Various persons seen carrying a firearm during the storming may be prosecuted under these firearm prohibition statutes.

Could the Rioters Be Pardoned?

“The President shall have Power to grant Reprieves and Pardons for Offenses against the United States, except in Cases of impeachment.” US Constitution, Article II, Section II, Clause 1.

Do I Need the Help of a Lawyer if I Have Been Charged with a Felony?

You should contact a criminal defense attorney if you have been charged with a felony. A skilled criminal attorney can explain your rights, assist you in preparing a defense, and can represent you in court.