Florida passed a school guns bill that would expand existing guardian programs to allow classroom teachers to voluntarily carry weapons on campus. Volunteer “guardians” are trained to stop an active assailant on campus, but cannot make arrests or otherwise act like police officers. Teachers would not be required to carry guns, but if local school boards approve, they may voluntarily carry a firearm on campus.

Even with local school board approval, guardians must undergo 144 hours of firearms training, possess a valid concealed weapon permit, and pass a psychological evaluation and drug test. The 144 hours requirement is notably lower than the 770 hours that law enforcement are required to undergo before they can carry a firearm in public.

Many other crucial rules are left to local school boards, including the guns that guardians would be allowed to carry and whether students would be permitted to know who the guardians are.

The local autonomy has resulted in some controversial decisions. One charter school permitted guardians to carry military-grade weapons. Some districts believe that students have a right to know which teachers are carrying weapons while other districts maintain that safety requires that the exact number and identity of teachers carrying remain concealed except to law enforcement.

Florida had occasionally debated permitting teachers to carry weapons in the classroom, but the bill did not gain significant traction until the Parkland shootings. The new bill is in sharp contrast to the March for Our Lives protests led by David Hogg and other students, who demanded stricter gun control as a means of ending the violence that upended their lives. 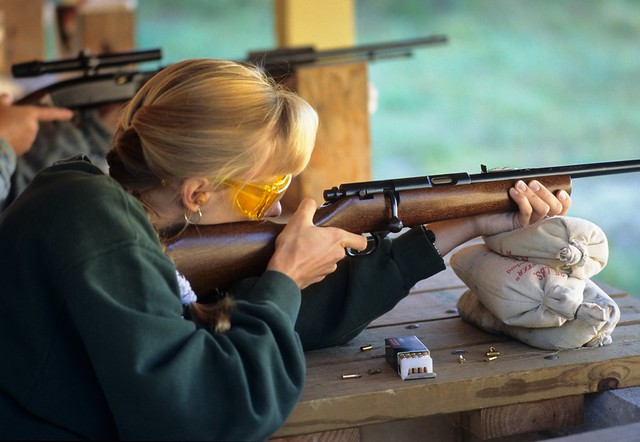 No Barrier to the Second Amendment

“A well regulated Militia, being necessary to the security of a free State, the right of the people to keep and bear Arms, shall not be infringed.”

The elephant in the room of this discussion is the omnipresent Second Amendment. Certainly this bill is in line with the Constitution’s understanding of a “well-regulated militia” and there no infringement of the right to keep and bear firearms if the program is optional. However, the necessity of this bill is in doubt if we are putting our most vulnerable citizens at risk.

However, even the best of us can become careless. If the former Vice President of the United States can shoot a man in the face by accident, think about the havoc children and overworked teachers can do in enclosed areas.

The split in local ordinances over whether to disclose the “guardians” on campus increases the risk of liability no matter which direction they choose. If they fail to disclose who is carrying a firearm and an incident occurs, parents and families will argue that disclosures should have been made.

On the other hand, if schools require teachers disclose their firearms, and an incident occurs, then parents can argue that school districts should have complied with the original state concealed carry laws.

It is entirely foreseeable that children may be unintentionally injured if teachers carry firearms. Teachers are wonderful people who devote their life to mentoring children who pass through their classrooms, but mistakes will happen.

If parents can become careless enough with firearms to put their own children in danger, the chances that other children may be in danger with a firearm in a classroom would be higher.

Proliferating Guns Does Not Guarantee Safety

Governor DeSantis and others argue that lives could have been saved if teachers had been allowed to carry. Former Deputy Scot Peterson refused to enter the building while the shooter was killing students and staff on Valentine’s Day 2018.

Governor DeSantis’ logic is based on too many theories for the trade-off to ever be worthwhile. First, we are all assuming that there will be a mass shooting. Although school shootings receive a lot of press, most schools and most students will never experience it. Putting children in greater danger of a negligent shooting to prevent a mass shooting that may never occur is a terrible deal.

Second, Governor DeSantis is assuming that everything will go perfectly during a shooting. If a trained deputy can be afraid and terrified during a crisis, undertrained teachers might not fare much better. The guardians must also be able to recognize each other during a firefight and law enforcement must also know who is a guardian and who is an active shooter.

In fact, a firearm accident may prompt guardians and law enforcement to believe there is an active shooter incident. The false alarms will only result in unnecessary tension and injuries in schools.

Previous
« Raising the Smoking Age to 21 is Unhealthy for a Sane Legal System
Next
Could Choosing Homeopathy Over Medicine Be Considered Child Abuse? »