The Supreme Court upheld Trump’s travel ban on several Muslim dominant countries in a 5-to-4 vote. The court’s conservatives affirmed the President’s power was not undermined by the crude and defamatory remarks made by its current occupant.

Chief Justice Roberts acknowledged Trump’s many statements concerning his “Muslim ban.” However, Roberts argued that the President’s mouth must be balanced against the office of the President’s responsibility to protect the nation. Justices Kennedy, Thomas, Alito Jr. and Goursuch joined the majority opinion. Justices Sotomayor, Breyer, Kagan, and Ginsberg dissented.

One week after his inauguration, Mr. Trump issued his first travel ban. The first ban was blocked by lower federal courts, but not before wrecking havoc at the nation’s airports as citizens and officials alike tried to figure out exactly what was going on.

A second version came two months later. This version was also struck down by lower courts, but the Supreme Court allowed part of it go into effect in June 2017 when it agreed to hear the Trump administration’s appeals from court decisions blocking it. The Supreme Court dismissed those appeals after the second ban expired in October. 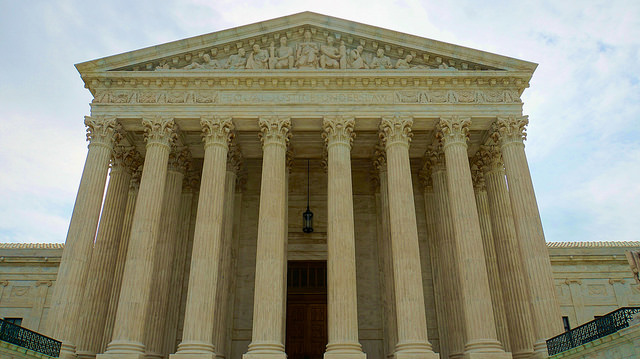 A third ban was enacted in December. It initially restricted travel from eight nations – Iran, Libya, Syria, Yemen, Somalia, Chad, Venezuela and North Korea – six of them predominantly Muslim. Chad was later removed from the list. Citizens of the countries were barred from emigrating to the United States, and many of them are barred from working, studying or vacationing here. The Supreme Court allowed the ban to go into effect while legal challenges moved forward.

The State of Hawaii, several individuals, and a Muslim group challenged the latest ban. They did not object to the portions concerning North Korea and Venezuela. They argued the third ban, like the previous ones, were the product of religious animus and not actually based on national security concerns.

The Ninth Circuit Appeals Court ruled that Mr. Trump had exceeded the authority Congress had given him over immigration and had violated a part of the immigration laws barring discrimination in the issuance of visas. In a separate decision, the Fourth Circuit blocked the ban because violated the Constitution’s prohibition on religious discrimination.

Last week, a 7-2 majority ruled that the Colorado Civil Rights Commission was biased against a Christian who refused to make custom cakes for gay couples because the commission made comments such as:

“I would also like to reiterate what we said in the hearing or the last meeting. Freedom of religion and religion has been used to justify all kinds of discrimination throughout history, whether it be slavery, whether it be the holocaust, whether it be–I mean, we–we can list hundreds of situations where freedom of religion has been used to justify discrimination. And to me it is one of the most despicable pieces of rhetoric that people can use to–to use their religion to hurt others.”

Justice Kennedy believed that this kind of comment belittled the baker’s faith and was sufficient grounds to overrule the commission. Personally, I think the commission was making an accurate historical observation, not a disparaging remark about Christianity in general. Religion has been used to justify all kinds of horrible behavior throughout human history and courts should attempt to draw the line somewhere.

Regardless of my personal views though, religious freedom is a right guaranteed by the First Amendment. It is a fair reading of the Constitution to mandate that government officials focus solely on the issues they are appointed or elected to focus on rather than make snide side comments.

However, if that is a true principle, than the Court made a grave error by ignoring or brushing aside the remarks made Donald Trump. If a civil rights commissioner can be hostile towards Christianity because he observes that religion has been used to justify human rights abuses like slavery, than these kinds of comments must also indicate hostility towards Muslims:

There are only four possibilities why the President should be given greater deference than the Civil Rights Commission in Colorado:

The first reason is a betrayal of the equal protection of the law promised by the 14th Amendment. The second reason would render the Constitution a hollow lie – our constitutional rights are just as important as our physical safety. We should not sacrifice freedom for security under any circumstances – “Those who would give up essential Liberty, to purchase a little temporary Safety, deserve neither Liberty nor Safety.” Benjamin Franklin.

The third reason is the most legal and moral rationale, but it doesn’t apply here. Chief Justice Roberts only talks about national security – he never says a word about the differences between citizens and noncitizens in this case.

More importantly, the travel ban has impacted citizens. When the administration implemented the first version of the travel ban, American citizens and/or their family members from targeted countries were barred from entering. Justice Kagan’s dissent points out that the State Department is still denying entrance to those who pose no security threat but who have family ties to citizens.

The fourth reason is plausible, but the argument swings the other way as well. It would be wiser for judges to give greater scrutiny of officials higher up in the government hierarchy. The President makes sweeping executive orders that impact the entire world. The Colorado Civil Rights Commission only affects Colorado and only the individual cases it hears.

In fact, national security is the number one reason that any government uses to curtail religious freedom. The Court should examine the most popular rationale for government abuse of power with the same magnifying glass it used on civil rights commissions instead of applying this double standard.

The Moral Cowardice of the Court

With all due respect, Chief Justice Roberts and Justice Kennedy are cowards. Reading between the lines of their opinions, it is clear that they sense something is wrong. The opinions they are wrote were unusual and indicate that they were conflicted.

Justices Thomas, Alito and Goursuch seem to believe that the travel ban is fine. If that is their belief, I can respect that, even if I do not agree with it. It is the so called moderates that are rage inducing though. Their failure to follow the courage of their convictions will do more harm than good.

Chief Justice Roberts noted that Korematsu, the infamous case that legalized Japanese internment camps during WWII, was unconstitutional. This was long overdue. Somehow though, the Chief Justice still managed to be completely wrong.

Roberts and the rest of the Court condemned the camps of Korematsu, but the majority upheld the travel ban by using the same logic that the Supreme Court used in 1944. The argument that national security trumps civil rights (pun intended) and that the Court should always defer to the President if the Executive Branch invokes those magic words will only lead to more cases like Korematsu in the future. Korematsu might be dead as case law, but Roberts kept its spirit alive.

Kennedy’s concurrence was even worse. He spent a couple of sentences agreeing with the majority, and then went into a lecture about how the oath to preserve the Constitution applies even when the Executive Branch engages in actions that are beyond judicial oversight.

Evidentially, Kennedy expects that those with no oversight will always act consistently with the law. This belief that the Executive Branch will act in good faith without judicial supervision will destroy the Republic. Americans are counting on the Court to declare if the President has overstepped his bounds. Justice Kennedy’s backhanded deference is worth less than Robert’s overturning of Korematsu.

Dr. Martin Luther King Jr. once wrote: “I have almost reached the regrettable conclusion that the Negro’s great stumbling block in the stride toward freedom is not the White Citizen’s Councilor or the Ku Klux Klanner, but the white moderate who is more devoted to “order” than to justice.”

If any Justice, regardless of their political alignment, has any reservations, they should vote based on those reservations. It is easy to rule that Korematsu is unconstitutional after seventy-four years have passed. The hard part is acting on those noble principles in a case that will affect people and politics today.

Chief Justice Roberts and Justice Kennedy might have risked the President’s wrath by ruling against his travel ban. But they are risking the Republic’s moral and legal foundation by ruling in favor of it.

Previous
« Justice Kennedy Retires From Supreme Court: What This Means for the Future of Law
Next
Supreme Court Ruling Makes Whole Public Sector "Right to Work" »