The concept of right to work, a misleading way of saying not requiring everybody to pay into unions covering them, has recently seen its biggest win yet after nearly a decade of campaigning for laws at the state level. In the recent Janus ruling the Supreme Court has made right to work the blanket norm for all public-sector workers.

This is a huge move, taking an enormous amount of money from an enormous number of unions. What’s more, and perhaps even more importantly, the ruling will embolden legal action from the growing “right to work” movement across the nation.

This new ruling reverses the over 30 year old Supreme Court decision Abood v. Detroit Board of Education, which had previously held union agency fees to be allowable, on First Amendment grounds. In order to understand the thought process behind the ruling, and the issues with it, let’s take a look at right to work itself as a legal concept, the history and reasoning behind the Janus ruling, the arguments of the dissent, and what this means going forward. 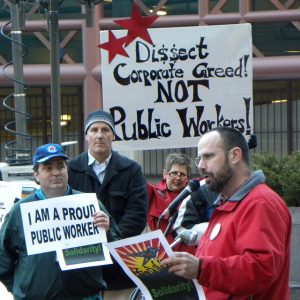 What is “Right to Work” Law?

We’ve talked about the concept of “right to work” before, as well as how the phrase “right to work” doesn’t really properly describe the legal concept. Right to work laws have been a center of controversy for around a decade now, with several laws facing constitutional challenges in the courts.

You might hear this and be surprised, as “right to work” certainly doesn’t sound like a controversial topic. Pretty much everybody would agree that reducing unemployment is a good thing–if that was what right to work meant.

While right to work sounds purely innocuous, the name is a bit of a misnomer–crafted to intentionally frame a more controversial policy point in as positive a light as possible. The confusingly named right to work actually deals with an employee’s choices when it comes to joining or not joining a union.

The laws are a product of a federal law from 1947 called the Taft-Hartley Act. The act prohibited employers from running closed shops–agreements where they only hire unionized workers.  However, it allowed union shops–agreements where employees are required to join a particular union within a certain period of time after being hired.  The act also has a section which allows states to ban union shops as well.

The laws based on this section are right to work laws and are, at this point, exclusively state law. While they vary state to state, they all do essentially the same thing–allow an employee to opt out of paying union dues while still benefitting from union representation.

Due to the exclusive bargaining agreements unions provided by the National Labor Relations Board (NLRB), a union is required to cover employees within its jurisdiction even if they choose to not pay anything at all into the union. They are required to represent all employees in the group they are representing without discrimination and regardless of whether they are even a member of the labor organization.

The usual response to this is to require union dues to work somewhere. However, where “right to work” laws are in force employees have the option of paying nothing and still getting the same benefits as somebody who does pay into the union.

This creates a financial incentive to, regardless of your opinion of the union’s politics; opt out of the union fees. You’re essentially faced with the option to pay for a service or receive it for free; it’s hard to blame somebody for choosing the latter option. With around a decade of momentum on the movement, right to work laws currently are on the books in about half of U.S. states.

Right to work tends to be a conservative agenda point, with liberal interests preferring stronger unions with more money to advocate for higher wages and greater employee rights.

Those supporting right to work laws argue that employees should not be forced to pay a union whose positions they do not agree with–often framing the laws as a free speech issue. This was the way it was framed before the Supreme Court, and ultimately the primary source of the reasoning behind the majority’s ruling.

Rauner also brought a lawsuit challenging the practice of collecting union dues from those who would want to opt out of the union, calling it a First Amendment issue as it forces sponsoring the political speech of a union. This case was ultimately dismissed for lack of standing and the mandatory union fees were kept in place. However, this sowed the seeds for Janus.

In Janus, a public employee was challenging the constitutionality of Illinois law requiring fees on the First Amendment grounds that the fees forced him to support the political speech of the union–speech which he did not support.

The Illinois rules did not require full fees for public employees who opted out of a union, instead requiring a lower fee known as an agency fee. This agency fee was calculated by the union to cover representation costs as opposed to the costs of their other endeavors.

However, despite these provisions, the Supreme Court majority of Justices Alito (writing the ruling), Roberts, Kennedy, Thomas, and Gorsuch, determined that the mandatory fees violated the First Amendment by requiring public employees to “subsidize private speech on matters of substantial public concern.”

In other words, the law–when applied to public employers–was the government of the state of Illinois requiring citizens to sponsor political speech. The argument from the majority overruled a long held opinion of the Court, usually something done only after close consideration and especially surprising from Justice Roberts who frequently justifies decisions on a basis of respecting existing legal precedent.

The federal and state governments are usually held to high levels of scrutiny (a legal standard for examining the constitutionality of a law or action) when they limit or force speech through their laws. However, the government has a fair bit more leeway when they are acting as an employer regulating their employees.

Despite this, the Supreme Court chose to use a rarely used standard of scrutiny they called “exacting scrutiny.” The scrutiny level, slightly less than the highest level-strict scrutiny-required the state of Illinois to show that their rules “serve a compelling state interest that cannot be achieved through means significantly less restrictive of associational freedoms.

The Court said that Illinois could not do this, despite the importance of protecting employees through unions. What’s more the Court majority argued that it was practically impossible to separate political and non-political dues, both due to transparency issues and the idea that any money paid to defray other costs makes more money available for political action.

We discussed already that the government has a different level of responsibility when it comes to acting as an employer, usually applying something known as the Pickering test before turning to the usual scrutiny standards. Under the Pickering test, as supplemented by other Supreme Court rulings, the government is generally free to restrict speech of their employees where speech is made pursuant to official duties.

What’s more, there is no protection unless the employee is addressing a matter of public concern, the speech doesn’t interfere with the employee’s job duties, and the employee is speaking as a private citizen. The Court dismissed this analysis entirely, something the dissent–authored by Justice Kagan–took them to task for.

The dissent questioned the lack of respect for precedent, the out of hand dismissal of a Pickering analysis, the majority’s dismissal of the government’s interest in strong unions, and the use of the First Amendment to undermine “the role of public-sector unions.”

Perhaps most substantially, the dissent pointed out the obvious. If you don’t require fees for covered employees, even reduced fees, there is an element of financial self interest which could lead to opt-outs and substantially undermine union funding.

What Does This Mean Going Forward?

Ultimately, this ruling means that mandatory union fees will not be constitutional for public employees across the nation. This does not mean the same will be true at a private level, the First Amendment analysis there is very different than fees ultimately required by the government.

However, it certainly serves to highlight how dramatically the outright refusal to consider Supreme Court appointees by Republicans during President Obama’s term will affect the rulings of the Supreme Court for decades to come. This is especially true in light of Justice Kennedy’s recent retirement.

At a minimum, the ruling will impact around 5 million state and local government workers who are currently required to pay agency fees. It is a huge rollback in terms of union strength. However, it remains to be seen how it will impact the larger right to work discussion.

Right to work is a back and forth battle throughout the country. On one side, the laws provide workers more options, but at the same time they take money away from unions who would use it to negotiate higher wages and better workers’ rights.

Without question, this ruling will certainly embolden interests promoting right to work laws, perhaps taking what has primarily been state level efforts into the federal domain.