Justice Kennedy Retires From Supreme Court: What This Means for the Future of Law

This means that two Supreme Court Justices, positions which shape the legal landscape for decades on end, will be appointed by President Donald Trump. Even more than this, as we’ve talked about in the past, Justice Kennedy has long represented a crucial swing vote on a number of key issues.

Best described as a center-right presence with occasionally liberal leanings among primarily firmly conservative or liberal justices, Justice Kennedy’s presence has been a key factor on several issues since his appointment in 1988–breaking ties on these issues.

Perhaps the most visible of these issues from a political standpoint has been his record on in support of LGBT rights and a woman’s right to an abortion. However, he has been just as integral when it comes to rulings on the prison system, the death penalty, affirmative action, more.

He will be sorely missed, and his absence has a strong chance to lean all these issues towards more conservative positions once he is replaced. Let’s take a look at how Justice Kennedy’s presence impacted all these issues and what the Supreme Court’s makeup may look like going forward. 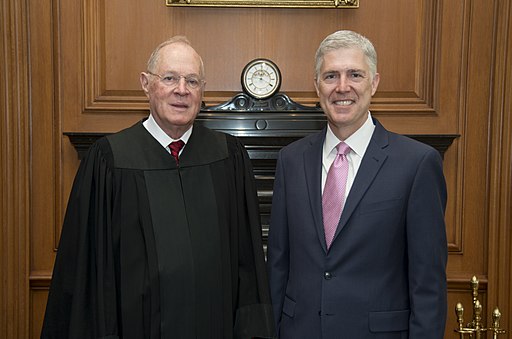 In terms of the decisions Justice Kennedy himself has authored, the realm of LGBT rights decisions will almost certainly be his most enduring legacy. He wrote the 1996 decision in Romer v. Evans which determined that struck down a Colorado state constitutional amendment which barred cities and town from banning discrimination against homosexuals and bisexuals.

He also wrote Lawrence v. Texas, holding unconstitutional anti-sodomy laws. He wrote the United States v. Windsor decision in 2013, overturning the anti-homosexual marriage Defense of Marriage Act. Most recently, in 2015, he wrote Obgerfell v. Hodges, the well known ruling which did away with bans on same sex marriage completely–holding them unconstitutional.

He famously wrote that “no union is more profound than marriage, for it embodies the highest ideals of love, fidelity, devotion, sacrifice and family…As some of the petitioners in these cases demonstrate, marriage embodies a love that may endure even past death.

It would misunderstand these men and women to say they disrespect the idea of marriage. Their plea is that they do respect it, respect it so deeply that they seek to find its fulfillment for themselves. Their hope is not to be condemned to live in loneliness, excluded from one of civilization’s oldest institutions. They ask for equal dignity in the eyes of the law. The Constitution grants them that right.”

Without Justice Kennedy on the Supreme Court, and a conservative replacement in his chair, these rights will be in even more danger than usual. Trump’s first appointee, Justice Gorsuch, already has a history of opposing all but the narrowest readings of Obgerfell.

The closest thing to a swing vote in the Supreme Court after Kennedy leaves will be Justice Roberts, himself a conservative centrist. When it comes to LGBT rights, however, Justice Roberts’ vote is unlikely to swing anywhere but against them.

The recent ruling allowing one specific baker to refuse to bake for an LGBT wedding on the grounds of religious belief was extremely narrow, but a future ruling might see more sweeping application without Justice Kennedy.

It seems very possible that a more conservative majority, especially based on Justice Roberts’ voting history, could construe Obgerfell rights extremely narrowly until it is just the right to receive a marriage certificate with no additional guarantees against other types of discrimination. It’s too early to say for sure, but the loss of Justice Kennedy will be a dire loss for LGBT rights.

Justice Kennedy’s retirement has been in the sights of conservative interests hoping for a Roe v. Wade reversal for quite some time. Justice Kennedy was one of the Justices in support of the original ruling back in 1992, substantially limiting laws denying women’s health services such as an abortion as unconstitutional.

As many already know, the Roe v. Wade ruling is a cornerstone of a woman’s right to choose to terminate a pregnancy. It substantially limits the types of restrictions a state can place on access to abortion services, limitations expanded on in later case law such as Planned Parenthood v. Casey.

While campaigning, one of Trump’s promises was to appoint a Justice who would overturn the Roe v. Wade case and allow states to essentially deny women the right to an abortion. Without Justice Kennedy, a new conservative Justice would give the hard conservative majority necessary to do this.

It would take some time to reach such a decision, a law would need to be passed and make its way up to the Supreme Court on appeals as to its constitutionality–all after the appointment of a new conservative Justice was confirmed.

This would likely take months or even years. That being said, such a ruling would allow states to drastically undermine the availability of options to terminate a pregnancy, forcing some women to take matters into their own hands. This would be a dangerous state of affairs for women denied safer choices by the state they live in.

Justice Kennedy’s Positions on Prisons and the Death Penalty

With Justice Kennedy gone, this majority is gone and so are most majority positions in the Court when it comes to moderating the prisons. For instance, Justice Kennedy supported releases to reduce overcrowding in California. Without him, these sorts of decisions and prison reforms are unlikely to occur in the near future.

On a related note, Justice Kennedy was also one of the judges that would have been necessary to support any sort of ruling limiting or ending capital punishment. His record is a bit on the spotty side when it comes the death penalty, supporting the constitutionality of some variations and methods of capital punishment. However, without him any chance of a ruling along these lines is likely gone for the next several decades.

Affirmative action was an area where Justice Kennedy was best described as a swing vote. Over the years, he dissented against the constitutionality of some racial affirmative action practices in a number of cases.

In some cases, he outright wrote opinions calling the practice discrimination against white applicants–such as in the 2009 Ricci v. DeStefano where he wrote that a Connecticut Fire Department’s affirmative action in its hiring process was discrimination.

Without Justice Kennedy, it is very possible that a more hard conservative Justice will consolidate a majority which will substantially limit the boundaries of what can constitute constitutional affirmative action.

President Trump has been making quite a few overtures to convince Justice Kennedy to step down for some time now. Justice Gorsuch used to be Justice Kennedy’s legal clerk; his appointment was reportedly something that left Kennedy tickled pink.

The exact impact of Justice Kennedy’s retirement will partially depend on whether the appointment of a new Justice is delayed until after these midterms.  If a hard conservative Justice is appointed, it seems likely that the makeup of the Supreme Court will be four hard liberals, four hard conservatives, and Chief Justice Roberts–a fairly conservative leaning Justice–as the closest thing to a swing vote.

It is also worth noting that one of those liberal Justices, Justice Ruth Bader Ginsberg, is 85 years old. She remains sharp as a tack and a brilliant legal mind, but her retirement is likely in the cards within the next several years and almost certainly within the decade. As it is, a conservative appointment would already leave a fairly substantial conservative majority within the Court for at least the next decade.

As for that appointment, the Senate Republicans are certainly not interested in waiting on the end of the election year, despite their protestations that this was their reasoning behind refusing to consider an appointment in former-President Obama’s last year in office.

Majority Leader Mitch McConnell has already said that they intend to vote on and confirm a successor to Justice Kennedy this fall. Should the issue be delayed, a change in the makeup of Congress would have a huge impact on the state of the law for the next decade or even decades, but it is unlikely this will occur.

Regardless, the loss of Justice Kennedy from the Supreme Court is a substantial one–it is the loss of a crucial swing vote on incredibly important issues. Justice Kennedy voted conservative on several issues–business regulation, Citizen’s United, gun rights, religious liberty versus discrimination, etc.

Even with Justice Kennedy on the Supreme Court, the makeup was usually described as 5-4 with a conservative majority. However, Justice Kennedy was an incredible legal mind and his willingness to support some important causes when it comes to people will be missed.

If things continue as they appear to be, it is likely we will see another hardline Justice appointed to the Supreme Court–one unwilling to make the considerations Justice Kennedy did. The face of law will change for decades to come.

Previous
« Can Businesses Discriminate Against Customers Based on Political Differences?
Next
Supreme Court Unofficially Reverses Its Colorado Bakery Case When It Upheld the Travel Ban »