Can Businesses Discriminate Against Customers Based on Political Differences?

White House press secretary Sarah Sanders was kicked out a Red Hen restaurant in Lexington, Virginia as a protest against the Trump Administration. Stephanie Wilkinson said she and her staff believed Ms. Sanders worked for an “inhumane and unethical” administration.

Days earlier, Homeland Secretary Kirstjen Nielsen was booed out of a Mexican restaurant in Washington D.C. Both cases are part of increasing pressure against the Trump Administration over its controversial policy of separating minor migrant children from their parents at the Southern border.

Ms. Sanders initially left the Red Hen without incident, but later posted on her official government Twitter account that “her actions say far more about her than about me.” The restaurant’s Yelp and Facebook pages exploded with comments and reviews either in support or against Sander’s removal.

Supporters compare the incident to the recent Supreme Court case in favor of Masterpiece Cakeshop, a bakery in Colorado that refused to make custom cakes for same-sex weddings. Critics see the exclusion as increasing political discrimination towards supporters for the current administration. 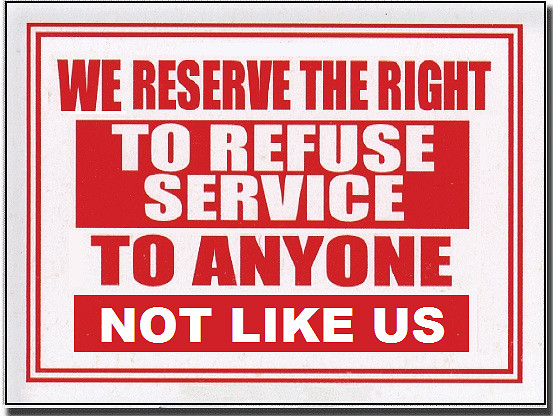 Notably, the Colorado Baker case did not give businesses the right to remove people. The case was overturned because the Supreme Court thought that the Colorado Civil Rights Commission had unjustly discriminated against the bakery. The Court’s main ruling in that case is not applicable to Red Hen and Sarah Sanders.

However, the Court’s other finding is applicable. The Court also found that the creation of a custom cake is an act of free speech. Any overlap between the Colorado Baker case and Red Hen will be about the First Amendment and free speech protections.

There are some similarities and differences to the Colorado Baker case. Like the Baker case, Ms. Wilkinson was clearly expressing her right to free speech. Stephanie Wilkinson said she believed Ms Sanders worked for an “inhumane and unethical” administration.

The major difference between the Colorado Baker case and the situation with Red Hen is one of scope. The bakery only denied the gay couple the service of custom made cakes. The bakery was still willing to sell regular cakes to the couple.

In contrast, the Red Hen denied Sarah Sanders all service. However, this difference doesn’t actually mean much in context. Wilkinson made it clear she was throwing Sanders out because of her position in an administration that she and her staff strongly disapproved of. The First Amendment is strongest when directed at the government and there little doubt that this is a First Amendment case as well.

Is there an Anti-Discrimination Law that Protects?

Removing Sarah Sanders was a discriminatory act by Ms. Wilkinson. However, not all discrimination is illegal. The Civil Rights Act only prohibits discrimination based on certain traits, including race, sex, gender, religion and national origin.

Does the First Amendment Apply?

Even if discrimination based on politics was illegal, such a law would be challenged as a restriction on free speech and the right to petition the government for redress. Sarah Sanders use of her official government Twitter account to comment on the situation potentially raises First Amendment issues.

It might seem unfair that Red Hen can give Sarah Sanders the boot and Sander’s response would put her in the legal wrong. Why does the law respect Red Hen’s right to free speech but ignore Sander’s right to sit peacefully in a restaurant?

The Constitution is a one-way street because the law is designed to protect Ms. Wilkinson from Sarah Sanders. If Trump Administration officials like Sanders and Nielsen want to be treated better, they should consider listening to the people throwing them out of restaurants.

Previous
« How Does Alimony Work After Retirement?
Next
Justice Kennedy Retires From Supreme Court: What This Means for the Future of Law »