The Department of Labor released a proposed rule that would greatly expand the religious exercise exemptions for companies that compete for federal contracts. The proposal argues that Supreme Court decisions like Hobby Lobby have expanded the legal understanding of religious companies.

Unlike the current rules, the new proposal does not require that companies have a religious purpose to have an exemption. Instead, companies only have to declare themselves to be religious “in response to inquiries from a member of the public or a government entity.”

Opponents argue that the rule could open the door to fire, or refuse to employ, LGBTQ applicants or employees, people of minority faiths, divorcés, or women who don’t conform to strict gender norms.

The federal government hires about 420,000 contractors – the ACLU points out that nearly one quarter of employees in the country work for a federal government contractor. As written, the policy could allow a company that supplies caters food to military bases to fire an unmarried pregnant employee based on a religious belief.

The recent Supreme Court cases deal with private businesses own by individuals or families with religious beliefs. The first of these “religious business” cases began with challenges to Obamacare’s contraceptive mandate in 2012. The Court expanded the religious rights of business to include state neutrality – i.e. states must be neutral when weighing religious exercise cases. 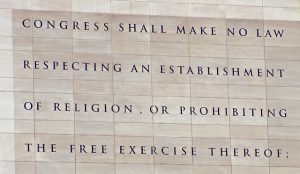 The main issue with this new proposal is that it further blurs the distinction between religious discrimination and secular discrimination. The religious exemptions were written in 1965 to ensure that churches could decline to hire people outside their faith, and religious schools could choose to hire members of their own faith without violating anti-discrimination laws. The religious exemptions only applied to a limited number of organizations. It was also obvious that their belief was sincere because their faith was the reason the organization existed at all.

In contrast, it is difficult to determine whether for-profit organizations like Hobby Lobby and Chick-Fil-A are actually sincere in their beliefs or whether they want to use religion as a pretext for otherwise illegal discrimination.

Corporate “beliefs” are focused on the beliefs of their owners even if the businesses employ hundreds or even thousands of employees. Their primary purpose is to make money, not to facilitate worship or faith. The sincerity test was never going to properly apply to businesses, but relaxing the standard to self-determination means opening the door to further abuse.

To make matters worse, the Court also required that states maintain neutrality when balancing anti-discrimination laws against the freedom of religion. Justice Kennedy even chided Colorado Civil Rights Commissioners in the Masterpiece Cakeshop case for vocalizing that religion could be used – and has been used – to harm others. “The commissioner even went so far as to compare Phillips’ invocation of his sincerely held religious beliefsto defenses of slavery and the Holocaust.

This sentiment is inappropriate for a Commission charged with the solemn responsibility of fair and neutral enforcement of Colorado’s antidiscrimination law—a law that protects discrimination on the basis of religion as well as sexual orientation” (emphasis added). But who decides if the owner’s beliefs are sincerely held? According to the Department of Labor’s proposed rule, the owner should be the one who decides.

Does This Religious Exemption Create an Open Door?

No surprise then that LGBTQ and other minority groups are concerned about the impact this new rule may have on them. However, the real test will be whether the same standards apply for religious businesses that practice a faith other than Christianity. Is it acceptable for Muslims business owners to deny employment to all women? Can Jewish employers fire employees for refusing to work on Sundays?

More importantly, if religion can be used to avoid anti-discrimination laws, there may be other regulations that religion can exempt a corporation from. However, religion has rarely exempted individuals from government laws or regulations – giving businesses yet more rights that were originally meant for individuals.