A Pennsylvania Grand Jury report has recently produced evidence of over a thousand sexual assault and rape victims in just six of the eight Dioceses of the Catholic Church in the state. The indictment also detailed enormous efforts within the Dioceses to conceal these crimes, as well as very little done to punish the priests involved.

It goes through each Dioceses and its leadership in detail, covering abuse and steps taken to cover up that abuse through either active obfuscation or persuading victims not to come forward. The nearly 900-page report and indictments were published to the public a few weeks ago, but very nearly did not see the light of day.

The original Grand Jury investigation–gathering 23 average citizens of Pennsylvania to review and collect evidence on the issue–was brought together two years ago in 2016. Their results were initially set to be published back at the end of June of this year. However, several unnamed current and former clergy members brought a legal challenge arguing that publishing the report would be a violation of their due process rights.

The Dioceses discussed in the report cover 54 of Pennsylvania’s 67 counties and took years to put together due to the sheer amount of evidence and witness and victim testimony to be heard. It covers 70 years, accuses over 300 priests of various sexual crimes, and describes over 1000 victims.

Religious belief and religion and general can be a beautiful and positive force in a persons’ life, many people have benefited greatly from religion and others have lived happy lives without religious belief. Going through the practices and crimes outlined in the report is a horrifying and grotesque read. What’s more, these crimes of rape and sexual assault fill the vast majority of the 900-page report. 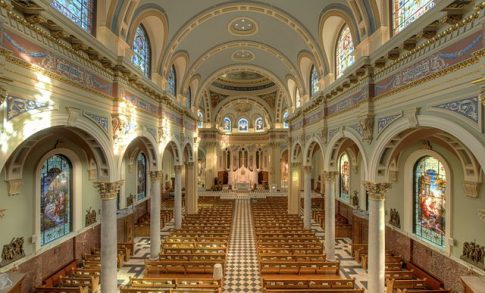 Child Sexual Abuse by the Pennsylvania Diocese: The Report Itself

The actual offenses of rape and sexual assault detailed against specific individuals are myriad and so horrifying that it is not something that will be gone into in full detail here–suffice to say they take up almost 600 pages of the 900-page grand jury report.

One instance, to give an example of the seriousness of the allegations, involves the same priest raping a woman at the ages of seven (in her hospital room after a surgery), thirteen, and nineteen (this time while she was pregnant). After the attacks came to light, the priest was not defrocked but instead his punishment was to–according to a Harrisburg Bishop–lead a life of prayer and penance.

Another egregious example saw a priest accused of sexual assault simply moved to another parish where he did it again, this pattern continued until he left the clergy of his own volition. This priest was then hired at Disney World after a glowing recommendation from his Diocese.

Besides the fairly common practice of simply moving clergymen who were caught in the act, the report also details some other strategies used in the Pennsylvania Dioceses the Grand Jury investigated. These include payments for silence, character attacks, never using the terms rape or inappropriate contact in written correspondence of the matters, only using church-run health centers to examine accused priests, and instructions not to inform law enforcement of accusations.

To put it lightly, the report includes enormous evidence of both sexual assault and efforts on the part of the Pennsylvania Diocese to prevent information about the assaults from coming to light rather than punishing them; often moving priests around rather than defrocking them. Many of the priests detailed in the Grand Jury report even went on to receive promotions within the ranks of the clergy.

The Grand Jury report also makes several recommendations to the Pennsylvania legislature. First, they ask for a removal of statute of limitations–rules requiring lawsuits be brought within a certain time frame-on child sexual assault. The current Pennsylvania law allows victims to come forward with criminal charges until they are age 50–age 30 for civil charges.

The rules for those who turned 18 after August 27th, 2002 are less lenient. In light on the many victims they interviewed above this age, the Grand Jury recommended doing away with statutes of limitations on the issue entirely. As a second recommendation, they advised creating a law to allow older victims to bring civil suits for the damage the abuse inflicted on them did to the rest of their lives.

Their third recommendation was a law mandating that such abuse be reported as a response to the decades of assertations on the part of the Pennsylvania dioceses that they had no obligation to report to authorities. Some laws along these lines already exist in Pennsylvania, but the Grand Jury requested more ironclad rules.

These recommendations are just that, the Grand Jury is composed of 23 individuals selected from a random pool by a judge and paid very nearly minimum wage for their time. Their recommendations do not carry the force of law or even of a court order or ruling. These individuals have spent two years investigating the evidence on this matter with very little compensation. Their thoughts on the matter deserve to be given weight by those with the power to make these changes–especially considering the horrific facts revealed in the report.

What is an Indictment?

For those unfamiliar with the concept of a grand jury, they are an integral part of a criminal indictment process. An indictment is the very earliest stages of a criminal case and only used for the most substantial crimes in terms of seriousness or scope of evidence.

In the indictment process, a grand jury of around twelve to twenty-three people are brought together to determine if there is enough evidence to determine that a defendant may be guilty. They do not determine actual guilt, just if there is enough evidence to move to trial. They review the charge, the evidence, and all witness testimony before making this decision. Where there is no grand jury, an uncommon occurrence, the process involves a preliminary hearing where a prosecutor goes through the evidence.

It is common for a grand jury to consider evidence for a few months, sometimes as long as a year, the two years taken here is extremely long for a grand jury and speaks to the sheer scope of the evidence and the report they prepared.

In the weeks following the Grand Jury report, there has been at least three instance of individual criminal charges brought against clergymen. Two priests named in the report have been charged; Father Kevin Lonergan–not named in the report–is currently facing such charges for his alleged molestation and sending of sexual messages to an underaged female parishioner.

Other states, such as Illinois, have seen their Attorney Generals announce investigations into similar issues in their own states–and especially into those named in the report which have since been moved to those states. The Illinois Attorney General, Lisa Madigan, said that there are at least seven such priests in Illinois.

The Pennsylvania Church saw higher ups express anger and shock over the report, as well as a “resolve to face our failures and hold each other accountable.” The Pennsylvania Attorney General, however, has described the church’s actions as a pattern of “abuse, deny, and cover up.” Church officials have continued to say that their policies and actions are being reviewed and updated.

In the lead-up to the report’s release, the Pennsylvania church released a list of 71 clergymen who have been accused of sexual misconduct which was later proven by the church over the last 70 years. This release, a few weeks before the report, was accompanied by an apology on the behalf of the church. This is nowhere near the over 300 clergymen described as committing these acts in the Grand Jury report–a number the Grand Jury said they believed was substantially lower than the actual number.

The last few weeks have also seen movement on the legislative front in Pennsylvania–especially on the matter of extending statutes of limitation on child sexual abuse and potentially creating a new window of liability for such acts. For instance, a bill called the “Real Deal” bill has proposed opening a two-year window after its passage in which victims of abuse could file claims otherwise barred by the statute of limitations.

The Pennsylvania Catholic Conference has made it clear that it will oppose this legislation, and any other attempt to alter or remove the statute of limitations on child sexual assault. Their spokesman has described the laws as forcing the church of today to defend the church of decades ago.

The law, and other similar laws, have also faced opposition in the state Senate from some conservative lawmakers. Their alternative approach, instead of a civil liability window, would be to abolish the statute of limitations for future criminal charges and raise the maximum age of filing a civil lawsuit over child sexual abuse from 30 to 50. This would help victims moving forward, but not so much the majority of those described in the Grand Jury report.

The Pennsylvania Attorney General continues to treat this as an ongoing investigation. The report has inspired many abuse survivors to step forward. They continue to receive calls and emails alleging abuse. Their hotline for abuse survivors is 888-538-8541.