America is a lawsuit happy country. Slip and fall on a milk spill? Sue the grocery store for property liability. Think there are ghosts in the house you just purchased? Sue the real estate agent and the seller for failing to disclose that it was a haunted house. Last week though, the Third Circuit identified an organization that is immune to most of the country’s lawsuit happy trigger finger: the Transportation Security Administration (TSA).

In 2006, Nadine Pellegrino and her husband planned to depart at Philadelphia International Airport, where they planned to fly back home to Florida. After Pellegrino passed the metal detector, TSA agent Thomas Clemmons and NuyriahAbdul-Malik asked her to step aside in order to search her three bags. Pellegrino accused the TSA of being unnecessarily rough during the search, displacing her things, and humiliating her by making her crawl under a table to retrieve one of her bags. The TSA agents accused Pellegrino of hitting them with her bags and had the Philadelphia police arrest her for assault.

Pellegrino was held in jail for 18 hours until she made bail.  Pellegrino was charged with various crimes, including assault with a deadly instrument, reckless endangerment, and making terrorist threats. A Philadelphia state judge later ruled she was not guilty because there wasn’t enough evidence against her. Pellegrino sued the agency for alleged misconduct and $951,200 in damages.

The District Court ruled in favor of the TSA on the grounds that it was immune from liability. Pellegrino appealed, but the Third Circuit ruled 2-1 that TSA screeners are immune from claims for assault, false arrest, and other abuses. 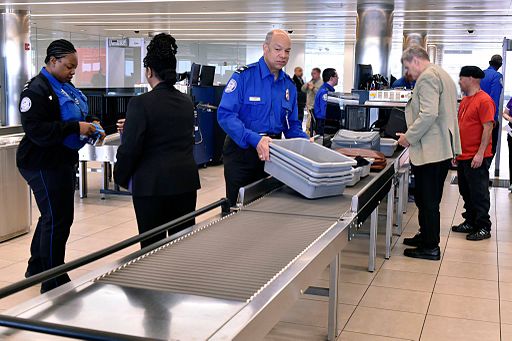 What is Sovereign Immunity?

If the government official did something wrong, there is typically a proper method of resolving the issue. A court ruling can be appealed to a higher court. Politicians should be punished at the ballot. As a rule, suing the government is usually harder if the disagreement is based on politics or policy rather than personal misconduct.

Ironic Reversal: What this Ruling Really Says About the TSA

This is the first time that an appeals court has recognized that TSA screeners are not law enforcement. Practically, this means that the TSA has no authority to arrest anyone or to investigate matters outside of its jurisdiction.

Federal district court judges have thrown out drug cases because it was the TSA that confiscated evidence of drug trafficking. Pellegrino’s case also demonstrates that the TSA have no law enforcement power. TSA agents had to call state police to arrest Pellegrino rather than make the arrest themselves.

Ironically, not being a law enforcement agency has helped the TSA rather than hinder it. TSA opponents have emphasized this fact in order to rein the agency in. Instead, the TSA’s non-law enforcement status has created a shield protecting its screeners from legal liability.

This unexpected reversal can only worsen the TSA’s public relations. Americans were already distrustful of TSA body searches, luggage searches, and millimeter wave scanners (the machines they make you walk through).

TSA scanners might be encouraged to abuse their power knowing that federal judges will not hear cases against them. Travelers who were already abused will find that one of the few legal ways to address their complaints have been closed off to them. Either way, making TSA scanners immune from lawsuits will only strengthen public anger against the agency.

There is one potential happy ending from this ruling. Chicago, Charlotte, Denver, Phoenix, and Orlando, among others,have discussed trading the TSA for private security companies. The idea was first floated because more than 70,000 passengers have missed flights due to long security lines.

As passenger complaints pile on and TSA success rates have plummeted, airports may find the thought of private companies running their security more attractive. A court ruling making the agency that the public hates might be the tipping point for airports to make the final switch. Ironically, giving the TSA immunity from lawsuits might be the agency’s downfall.