Texas enacted a new abortion bill in June 2011 that gives ordinary citizens the right to sue people involved in the abortion process. The Texas state legislature bans abortions after a doctor detects a fetal heartbeat six weeks after pregnancy. Most states with such laws leave enforcement to government officials. Texas is allowing private citizens, including those outside Texas, to sue doctors and others who violate this law for at least $10,000 per illegal abortion if successful. In other words, the state is no longer enforcing this statute – neighbors and random strangers are. 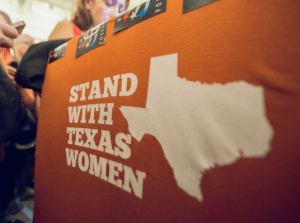 The crux of the pro-life movement has always been a deeply held religious belief that abortion of fetuses is child murder. This law seeks to allow anyone with such a belief to file lawsuits against clinics, doctors, and anyone else who help the woman abort the fetus. However, it is a constitutional requirement that lawsuits can only be brought if the plaintiff alleges that he, she, or it suffered a real harm or damage because of the defendant’s conduct. While it is admirable that some people believe they have a duty to protect unborn children who cannot protect themselves, this law is completely at odds with how the American legal system operates.

All parties must have standing to file a lawsuit or make a request of a court. Standing is the legal requirement that the “right” parties must bring the action. The “right” parties are the plaintiff(s) who allegedly suffered harm and the defendant(s) who caused the alleged harm. For instance, if someone slips and falls inside a Safeway, that person should sue Safeway, not Wal-Mart, 7-11, or another store unconnected with their accident.

Let’s say that a Texas resident kills a child of ten in Texas. Ordinarily, the state of Texas could bring criminal charges against the defendant for manslaughter or murder, depending on the exact circumstances that lead to the child’s death. The victim’s estate, represented by the child’s parents, could also file a wrongful death action against the killer. However, if the victim’s best friend, nurse, fourth-grade teacher, or a random activist from out of state were to file the civil suit, the lawsuit would be dismissed for lack of standing.

This law seeks to confer standing on those who have nothing to do with a woman’s pregnancy. Even if one accepts the premise that an abortion clinic is a murder factory, letting any random person sue the clinic is problematic. The first concern is whether there will be a flood of lawsuits by random pro-life organizations against Texas abortion clinics from all over the country. It would probably lead to many clinics closing down (probably the intent) but also a lot of time and effort to sort out frivolous suits.

Another Way for Abusers to Harass Women

More importantly though, the open door means anyone could file a lawsuit – including rapists and abusers who shouldn’t have any access or power to the women they assaulted. Rapists and abusers now have the ability to further harass their victims by filing lawsuits against medical personal who might help the victims. While criminal courts can charge an abuser and even through them in jail, that does not preclude the abuser from filing civil suits. The abuser could even flee the state and retain this unlimited jurisdiction. The new law does not include any exception for this potential disaster and lawmakers seemingly put no thought into this problem. Legislatures should put just as much thought into protecting women as they do into protecting religious beliefs when enacting these laws. Protecting fetuses and religious beliefs should not come at the expense of the mothers.

Where Can You Find a Sexual Assault Lawyer?

If you are accused of sexual assault, you should consult a skilled criminal defense lawyer in your area immediately to help protect your rights. Victims of sexual assault can also contact a lawyer about possibly filing a civil suit against the person who sexually assaulted them. Civil liability can still exist even if criminal charges are not brought.

Previous
« Did the Legal System Pay Too High a Price to Free Bill Cosby?
Next
Should Unvaccinated Persons Be Protected Against Discrimination? »