Could You Be Charged With Terrorism For Sneezing or Coughing?

On March 24, 2020 the Department of Justice sent U.S. attorneys and federal law enforcement agencies a memo that they should prosecute certain “purposeful exposure or infection of others with COVID-19” under federal terrorism laws. Such laws may include statutes making it a federal offense to use, threaten, conspire, or attempt to use a “weapon of mass destruction” against persons within the United States. Federal law includes biological agents, including viruses, as weapons of mass destruction.

Purposefully sneezing on another person during a pandemic is prosecutable as terrorism in the United States. Punishment may include range from a number of years in federal prison to the death penalty.

There have already been several instances where Americans have attempted to weaponize Covid-19 against others. In San Jose, California, a special education teacher allegedly coughed on an infant in a San Jose yogurt shop after an apparent argument over social distancing. She was dismissed from her job though it is unknown whether she was prosecuted.

Most alarmingly, Donald Trump may have debated Vice President Biden when Trump may have known he was already Covid positive. The current President announced he was Covid positive late Thursday evening and then went to the hospital less than 48 hours later. Since the virus may not manifest any symptoms for up to two weeks, there was a very good chance that Trump was already infected during the debate. If Trump arrived late to the debate to avoid the Covid testing, he may have known about his infection already. 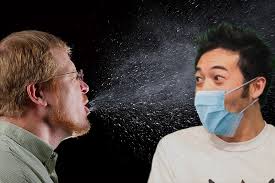 Ordinary Americans being prosecuted for terrorism for sneezing and coughing is probably not what Congress intended when it passed laws against terrorism and the use of weapons of mass destruction. However, the facts and exceptional circumstances fit the usage of these cases. People know there is a highly contagious disease inside the country and they know that this disease has led to over 200,000 deaths in the United States in about half a year. If a person knowingly takes action to infect others with this disease, it qualifies as the use and spread of a bio weapon if people are using Covid-19 in this manner. Prosecution for terrorism is arguably necessary to deter such dangerous behavior.

However, the use of anti-terrorism laws to criminalize otherwise ordinary acts are in poor taste. This interpretation of terrorism looks like textualism run amok. “Textualism” is a manner of interpretation whereby the plain text of a law is used to determine its meaning. Textualism is appealing as anyone who can read can decide what a law means without a fancy law degree. It provides a check on judges by forcing them to adhere to what Congress wants rather than what a judge may desire. The most famous example of textualism in the 21st century is Justice Gorsuch’s majority ruling that the Civil Rights Act’s prohibition against discrimination on the basis of sex extends to sexual orientation and gender identity.

Although many America’s welcomed Justice Gorsuch’s opinion, textualism without regard for original intent has its weaknesses. Chief among those weaknesses is a potential dive into absurdity. Such an absurdity is evident in determining whether sneezing or coughing – intentional or not – is now an act of terrorism.

Prosecutors have the controversial ability to determine what charges, if any, should be brought against a criminal defendant. This ability is often abused – prosecutors have been accused of favoritism on the basis of political parties, race, sex, and other factors that have nothing to do with the law. In instances like these though, prosecutor discretion matters.

A prosecutor can limit the power of the government by seeking a lesser charge rather than going overboard with a prosecution. Such discretion should and can be exercised in these types of cases. The San Jose woman is clearly guilty of something when she knowingly sneezes on an infant during a pandemic. But does it have to be terrorism or can it be a lesser charge like assault and battery? A plea deal can ensure that our laws are just and proportional and not abused in a brazen display of textual drivel.

Should I Contact a Lawyer If I am Facing Covid Related Charges for Terrorism?

Covid-19 related charges may quickly lead to terrorism charges. It is a crime that is not and should not be taken lightly, at either the state or the federal level. You should absolutely seek out a knowledgeable and qualified criminal defense attorney if you have been charged or are facing charges of making terrorist threats.