In a major victory for the LGBTQ community, the U.S. Supreme Court ruled in a 6-3 decision in Bostock v. Clayton that gay, lesbian, and transgender employees cannot be discriminated against in the workplace for being gay or transgender.

Justice Gorsuch wrote the majority opinion and was joined by Chief Justice John Roberts and Associate Justices Ginsberg, Breyer, Sotomayor, and Kagan. Justices Alito, Kavanaugh, and Thomas dissented. Although two of the three plaintiffs passed away prior to this victory, their estates continued to pursue the case on their behalf.

Justice Gorsuch’s logic is simple and is based on legal theories that have been proposed since George W. Bush was president. “An individual’s homosexuality or transgender status is not relevant to employment decisions. That’s because it is impossible to discriminate against a person for being homosexual or transgender without discriminating against that individual based on sex.” An employer who fires a man because he is married to another man is engaging in sex discrimination because that same employer presumably does not fire women for being married to a man.

This focus on individuals instead of groups obliterates any distinction between sex discrimination and LGBTQ discrimination. Firing an employee for being gay means firing someone based on their individual right to be sexually attracted to the same sex.

It makes no difference how the employer may treat heterosexual women or heterosexual men as the Civil Rights Act focuses on how employers treat every individual employee rather than how they treat men and women in general. 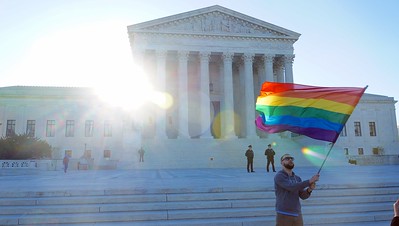 The Wedge Between Textualism and Originalism for the Supreme Court

The ruling will undoubtedly drive a wedge in judicial conservative philosophy. Judicial conservatives, most prominently the late Justice Scalia, have argued that judges should reframe from serving as unelected legislators by adhering to the text and original intent of a law.

Justice Gorsuch’s opinion purports to follow the literal text of the Civil Rights Act while outright stating that the Court was free from the original intent of the law. “But the limits of the drafter’s imagination supply no reason to ignore the law’s demands.” The ruling embraced textualism while trampling over originalism.

The dissenting justices accused the majority of judicial activism while falsely sailing under a “textualist flag.” The dissent accuses the majority of making new law by updating the definition of “sex,” a job that is reserved for Congress.

Indeed, Congress itself has made numerous unsuccessful attempts to update the Civil Rights Act after the Court legalized same-sex marriage. If the legislative body has failed to come to this new understanding of the law, then the Court is in no position to do so.

However, originalism would probably not have served the Court well in this matter. In the decades since the Civil Rights Act was enacted, rumors abounded that “sex” was only introduced into the Civil Rights Act as an attempt to sabotage and prevent the Act’s passage. The Democratic Party of 1964 was dominated by labor unions which were mostly made up of men.

Some opponents of the Civil Rights Act believed that by introducing “sex” into the bill that those same labor unions would turn against it. “Some of those who supported adding language to Title VII to ban sex discrimination may have hoped it would derail the entire Civil Rights Act.”

Based on this sketchy history, it is not a mystery why Gorsuch opted to ignore the history of the Civil Rights Act in favor of the text itself.

What’s Next for LGBTQ Rights?

The Court’s ruling only sets the general rule that discrimination against LGBTQ employees because of their status as LGBTQ is a form of sex discrimination. However, the Court has not determined whether there are any exceptions or exemptions to this general rule, including an exception or exemption for religious employers such as churches or other religious institutions. Justice Gorsuch explicitly left this door open for future cases. “But how these doctrines protecting religious liberty interact with Title VII are questions for future cases too.”

Do I Need an Attorney for Help with Workplace LGBTQ Discrimination?

You should consult with a knowledgeable employment law attorney if you need to file a claim for LGBTQ discrimination. An employment law attorney can help you determine and assert your rights, gather evidence, and guide you through the process of filing a claim with the EEOC. Additionally, they can help you file a civil lawsuit against the employer.

Previous
« George Floyd Protesters Should Be Released If Held More Than 24 Hours
Next
Can You Waiver Your Right to Sue For Getting Covid-19? »