A 10th Circuit Appeals Court has ruled that a Leo Lech, a Colorado homeowner, is not entitled to compensation from law enforcement after the police destroyed his home during a nineteen hour standoff with a shoplifter.

The Appeals Court affirmed the District Court’s ruling that because the police department and the City of Greenwood Village had acted within the scope of their police power, the damage to the house does not constitute a public taking.

Leo and Alfonsia Lech purchased the home at 4219 South Alton Street in Greenwood Village, Colorado, for their son, John Lech. John Lech lived at the home with his girlfriend and her nine-year-old son.

In June 2015, the Aurora Police Department was in hot pursuit of Robert Seacat, a shoplifter who had stolen some belts and t-shirts from Wal-Mart and was armed with a hand pistol. During the chase, Seacat took shelter inside the Lech home. He encountered the nine-year-old, but let him flee the property.

Seacat searched the Lech home for a vehicle he could use to escape, but the police caught up with him before he could leave. Seacat fired a shot at the officers from inside the garage then ran inside and took refuge inside one of the bathrooms. The officers spent five hours attempting to negotiate his surrender but to no avail.

The Aurora Police Department then attempted a series of escalating attempts to apprehend Seacat. They fired several rounds of gas munitions into the home, rammed the home’s doors with a BearCat armored vehicle – essentially a tank – and fired rockets to create sight lines and points of entry to the home. The officers sent in a tactical team to apprehend the fugitive, but Seacat fired at the officers while they were inside, requiring them to leave.

The officers deployed the BearCat vehicle again to open fire at the home and deployed a second tactical team to apprehend Seacat. The second team was successful: it managed to disarm Seacat and take him into custody.

In sum, the police took nineteen (19) hours, an armed vehicle, a couple of robots, several gas canisters, numerous explosives and rockets, and two SWAT teams to apprehend a Wal-Mart shoplifter armed with a single hand pistol.

As a result of the standoff, the Lech house was rendered completely uninhabitable. The house had several gaping holes all around the exterior where the police had fired their rockets. Many of their personal property inside the house was severally damaged if not completely destroyed.

The City of Greenwood Village condemned the Lech’s home and offered $5,000 in compensation. The house was completely razed to a vacant lot, and Lech said he has spent around $400,000 rebuilding it as well as $28,000 in legal fees incurred as he pursued compensation from the city and police.

Leo and Alfonsia Lech sued the City of Greenwood Village and Aurora Police Department for the destruction of his house in federal court. Lech argued that the destruction of the home constituted a public taking and thus he was entitled to just compensation.

The District Court granted summary judgment to the defendants, finding that both entities had acted in the scope of their police powers, the government had not actually “taken” the property, and thus the Lech family was not entitled to compensation under the Takings Clause. The 10th Circuit Appeals Court affirmed this holding. The Lechs are contemplating taking their case to the Supreme Court. 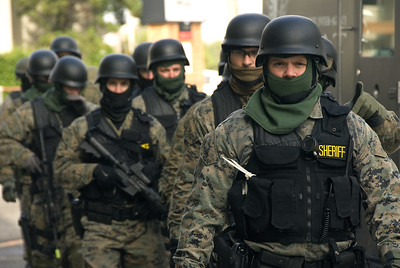 Does the Police “Take” Property If They Destroy It?

The Constitution of the Fifth Amendment “requires compensation when a taking occurs.” However, the Constitution is less specific about exactly when a public taking occurs. Eminent domain, when the government takes a private property for public use, is long recognized as a form of taking where the private property owner is entitled to just compensation.

On the other hand, a regulatory taking, where private property is hindered but not seized by a government regulation, is often not considered a taking. For instance, a factory owner is not entitled to just compensation if air pollution laws cut into the owner’s profits.

The 10th Circuit had previously ruled that private property owners are not entitled to compensation when the government is using its police powers – i.e. when the government acts to enforce the law to preserve health, safety, morals, and general welfare of their inhabitants.

Homeowners in the 10th Circuit are not entitled to compensation when the state tears down their doors in order to apprehend a fugitive. The 10th Circuit expanded this general rule from the home’s door to the entire property itself. Ultimately, the Court found that the state cannot be burdened with the condition that the state must compensate affected property owners for pecuniary losses they may sustain in the process.

The Court’s ruling is premised on the police acting within the scope of their police powers. There is no doubt that the police were shooting rockets and ramming down doors with tanks because they wanted to catch a criminal suspect.

However, the issue is not whether the police had authority to arrest Seacat but whether the force they used was reasonable given the circumstances. Given the full facts, it is clear that the amount of the force the police used against the house was completely out of proposition with the threat they were attempting to subdue.

The 10th Circuit’s ruling omits several facts that show the police were lacking common sense in their approach. The Court acknowledges all the drastic measures that the police took to arrest Seacat – they used gas, robots, an armored vehicle, explosives, and two SWAT teams.

However, the Court only described Seacat as an “armed criminal suspect who was evading capture by the Aurora Police Department.” Although this general description is accurate, it misrepresents what the police were dealing with. Seacat had stolen several articles of clothing from a Wal-Mart that totaled about $50-$70. In contrast, the police assaulted the house in a manner that resulted in $400,000 of damages.

The Court’s description of the facts also needlessly plays up the threat that Seacat presented to the police. The Court calls him an “armed criminal suspect” but neglects to mention that he was only armed with a single hand pistol. Although Seacat fired shots at the police, he also allowed a nine-year old to leave the premises unharmed.

The suspect was accused of robbing less than a $100 worth of items, not murder, terrorism, or even gang violence. Seacat was one petty thief, not Ted Bundy or Osama bin Laden. Of course, it’s unclear whether the police knew that Seacat was armed with only one pistol, but there were witnesses who could report what Seacat was armed with, including the nine-year boy.

Most judges are uncomfortable with telling other professionals, particularly law enforcement, how to do their job. Courts often given CEOs, doctors, and other experts’ leeway because judges often lack the expertise to properly evaluate whether they are acting competently. Potential lawsuits should not be a factor when police are required to act because the police must be focused on public safety rather than liability or exposure.

However, if competence is an issue, the question is often decided by a jury or an arbitrator instead. Although it is unclear whether the police acted disproportionately, there is certainly an argument to be made for it. This was a question of fact for the jury to decide, not judges on a summary judgment basis.

Certainly, the average citizen should be given a chance to weigh in because it’s their homes caught in this type of crossfire. Today, the police are using armored vehicles and explosives to catch criminal suspects. Will the police be permitted to use machine guns or chemical weapons if they deem it necessary? There must be some kind of limit. If judges will not limit law enforcement, then the citizens whom the police claim to protect and serve should be allowed to.