Even without the Latin influence, judges and attorneys often use very archaic English words. Although words like “demur” and “issue” might be English words, the words are never used in any setting except in courtrooms and legal documents.

For instance, the word “issue” could refer to either a topic of discussion or the legal heirs of a decedent during a will contest. To the average person though, it doesn’t matter if certain terms are in Latin or just obscure English. It’s all Greek to them.

Without context and education, it is impossible for non-attorneys to understand the language that lawyers use everyday among themselves and with judges. Nevertheless, there are common terms that people may hear in or around the courtroom more often than others. Below is a list of some of the more common Latin or legal phrases that one might encounter in a lawsuit:

A term used to differentiate two kinds of knowledge, arguments or justifications. This kind of knowledge is received independent of any experience.

For instance, if a husband wishes to murder his wife but never acts on it, then the husband has a “Mens Rea” but not an “Actus Reus” and thus would not be guilty of murder.

This term means for a particular situation, case or purpose. This term generally refers to something or someone appointed or introduced for a specific purpose and that purpose only.

This term literally means “approximately,” and its common law usage is to usually refer to a certain date.

This term can mean “body,” as much as it can mean the principal (such as money) of either an estate or a trust as separate from profits or interests.

This term translates to “fault in conclusion of a contract.” It is a significant principle in contract law.

This term is the Latin word for either fault or guilt.

This term translates to “in fact.” It is commonly put in place of the word “actual” to demonstrate that a court will regard as a fact any authority that is being exercised, even if all the legal obligations may not have been satisfied.

This Latin term literally translates to “the same place,” and it is employed to offer either a footnote or an endnote for a cited source in a prior footnote or endnote. The term is often abbreviated to “Id” when citing precedent cases.

This term translates to “when in doubt, for the accused.” This indicates that a defendant may not get convicted by a court if there are any doubts his or her culpability that remain.

This term refers to the “mental state” or criminal intent of a criminal defendant. Under most criminal statutes, a defendant must intentionally commit the act for the act to be considered a crime.

For instance, it would not be considered a crime to hit a person with a vehicle if you were merely distracted by text messages on your cell phone a few minutes before the accident. On the other hand, it would be a crime if you intentionally drove into your neighbor because he owes you $500.

Mens Rea is a common term in a criminal courtroom because it is such a critical element behind many criminal acts. In order to be convicted of most crimes, prosecutors must show beyond a reasonable doubt that the defendant acted with both a Mens Rea and an Actus Rea.

This term translates to “not twice for the same.” It asserts that no one legal action may be initiated two times for the same cause of action.

This term is a fundamental maxim in the legal thinking of continental Europe. It basically means that no crime was committed, nor can, therefore, any punishment be dealt, if there was no contravention of any law as it existed at that moment in time.

This term is translated to “on its first appearance” or even “at first sight.” This means that an issue appears obvious upon examination and based on the facts.

This term means “the thing speaks for itself.” It is most often used in personal injury law to describe situations where the court can assume that someone was negligent even if it is unclear how the negligence occurred. If a medical patient has a surgical tool inside of her abdomen post-surgery, it can be assumed that someone was negligent even if the exact cause has yet to be determined.

This term can be translated to meaning “of its own kind.” It is used as a term of art for the purpose of citing a legal classification that exists independent of other classifications.

This term means “above” in Latin. It indicates citations of any given court decision that has been mentioned in the past.

This term is employed to cite things that are in a direct relationship with one another. 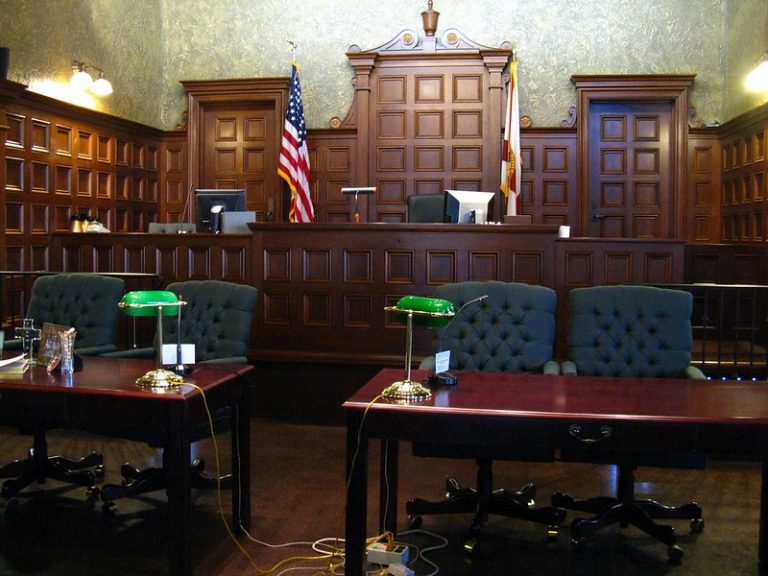 This phrase refers to a defendant in a civil suit who files another lawsuit in the same case against another defendant or a counter-suit against the plaintiff.

The phrase “demur” is an old English word meaning “to object.” A demurrer is a form of pleading that attorneys use to object to lawsuits. For instance, attorneys might file a demurrer if they challenge a lawsuit on the grounds that it violates a statute of limitations.

This term means a statement of fact that is brought before a court. It can also be interpreted as a brief.

This term indicates a particular court that has jurisdiction to hold a trial relating to a specific petition or suit. The term can refer to the separation between federal and state governments, the separation of the fifty states, or even local counties inside of states.

For instance, the forum might be an issue in a California divorce case if the husband lives in San Francisco while the wife resides in Oakland.

This term usually refers to a topic or controversy in a given case. For instance, if the parties are arguing over the terms of a Purchase Agreement, then the agreement is “at issue.”

The term has an entirely different meaning when used in the context of wills and trusts. The “issue of my son” would refer to the son’s children, grandchildren, great-grandchildren, and any other direct descendents that the son may have.

The phrase “joinder” refers to the joining of another party to a lawsuit. In some lawsuits, the joinder of a party may be necessary for the lawsuit to proceed. For instance, a tenant of a habitability case should always include the landlord in a lawsuit (as opposed to suing only the property manager).

This phrase refers to the wrongful inclusion of a party in a lawsuit. For instance, a lawsuit that names Jeff Bezos as an individual defendant would be misjoining Mr. Bezos if the lawsuit only complains about Amazon or the Washington Post without describing how Mr. Bezos is personally involved in the complaint.

This term refers to a party who files a lawsuit against another individual or legal entity.