Who is Judge Brett Kavanaugh? Understanding the Frontrunner to Replace Justice Kennedy

The Republicans in Congress are clearly interested in getting a Supreme Court nominee to replace Justice Kennedy voted on, and fast. This is no surprise, with midterms coming up the quicker the appointment process is done the less difficult it will be to appoint a heavily conservative leaning judge. As you’ve probably heard by now, President Trump’s nomination for the position is Brett Kavanaugh–a judge out of the DC Circuit Court of Appeals.

The 53 year-old Kavanaugh checks quite a few of the boxes of common Supreme Court nominees. He is a Yale and Yale Law graduate (every current Justice has graduated from Yale or Harvard), the DC Circuit has produced three of the current sitting Justices, and he’s worked with George W. Bush administration.

However, the real question Congress will be asking of him is where he stands on the issues. Judge Kavanaugh has been doing the rounds in Congress this last week, speaking to primarily Republican members of Congress but scheduling one or two sit downs with the other side of the aisle.

The lack of interest from the Democrats of Congress is not a shock, given the Republican’s choice to refuse to even hold a vote during Obama’s final year in office they have been quick to point out the inconsistency of immediately turning around and forcing a vote before the midterm elections.

The support for Kavanaugh from the Democrats is essentially zero. It’s not clear if this will matter, even if every Democrat votes against nominating Kavanaugh at least one Republican will need to join them to block the nomination.

It’s far from a sure thing, at least a few Republicans have said they are unsure of whether they support Kavanaugh, but as time goes on its looking more likely that Kavanaugh will be taking the seat vacated by Justice Kennedy. With this in mind, it’s time to learn to background and positions of Kavanaugh.

We’ve talked about the swing vote Justice Kennedy provides on issues such as abortion. With Kavanaugh in his seat, it’s important to learn his case history and where he stands on various legal issues. 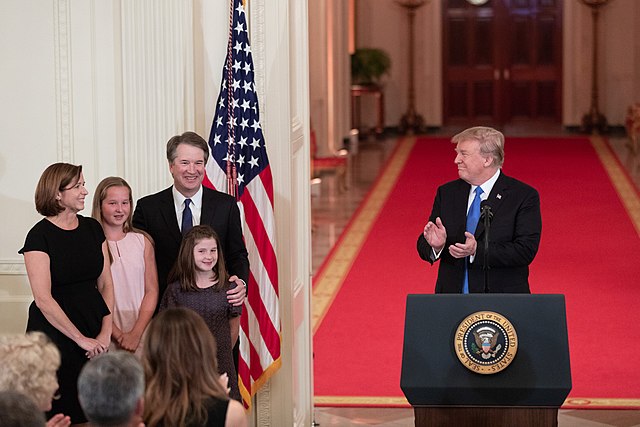 Among the many legal issues in question, Kavanaugh’s position on abortion is almost certainly the most salient. As we’ve discussed, Justice Kennedy acted as a crucial swing vote on abortion rights and Roe v. Wade. President Trump has made point of promising a new Justice who would provide the final vote necessary to overturn these protections to a woman’s right to choose an abortion. Thus, it may come as no surprise that in his personal life Kavanaugh is pro-life. However, the question remains whether that translates into a willingness to overturn Roe v. Wade.

When Kavanaugh was confirmed to the D.C. Circuit in 2006, he stated that he considered Roe v. Wade binding precedent. However, this is almost a non-statement as it is just the literal truth. As a lower court judge, Roe v. Wade simply was binding on any ruling Kavanaugh made unless he just wanted to ignore the law.

However, Kavanaugh went on to praise the dissent to Roe v. Wade and heavily implied that he thought the right to an abortion–at a minimum–would have to be heavily limited unless it was “rooted in the traditions and conscience of our people”–as stated by Justice Rehnquist in the dissent Kavanaugh was referring to.

Kavanaugh has also been involved, just in the last year or so, in a case where he dissented on an opinion that said that the Office of Refugee Resettlement could not stop an unaccompanied alien minor from getting an abortion.

There’s not a lot to go on here, but the context clues lean towards an assumption that Kavanaugh would reverse Roe v. Wade given the opportunity–an opportunity that is likely already in the pipeline as some states have become more aggressive about their abortion laws. In his personal life, and his rulings, Kavanaugh has been at a minimum skeptical of the extent of abortion rights. That, combined with the commitment of the Trump administration to overturning Roe v. Wade, tend to imply that Kavanaugh will not be favorable when it comes to supporting the right to an abortion.

Kavanaugh on The Mueller Investigation and Executive Privilege

Kavanaugh has been among the most supportive of strong executive privilege–the President’s immunity from suit and investigation–among judges. While originally part of the Starr investigation attempting to impeach former President Bill Clinton. However, he has changed his tune substantially since his work with the Bush administration.

In a 2009 article, Judge Kavanaugh wrote that he felt that presidents should not be “burdened” by criminal investigations or civil lawsuits. He even stated in an interview that Nixon potentially should not have been forced to turn over the Watergate tapes. Kavanaugh has written that “having seen first-hand how complex and difficult that job is…I believe it vital that the President be able to focus on his never-ending tasks with as few distractions as possible.”

This type of executive privilege does not mean a president is completely above the law, but defers it all until after their presidency is over. The most notable part of this is that it heavily implies that Kavanaugh would oppose the investigatory powers of the ongoing Mueller investigation.

The ACA is likely one of the reasons that Kavanaugh didn’t make Trump’s original Supreme Court nominee list back in 2016. He was part of a 2011 decision that declined to find the ACA unconstitutional–he dissented but his involvement has been said to have been a black mark in the eyes of President Trump. This being said, dissenting on the ACA isn’t exactly a sign he would be supportive of a similar act in the future.

Kavanaugh has had a history of ruling in favor of weakening environmental restrictions on businesses. In 2013, he supported requiring the Nuclear Regulatory Commission to allow a nuclear waste repository in Yucca Mountain. He ruled in 2014 to strike down Clean Air regulations, but was later reversed by the Supreme Court. In the same year he also wrote an opinion supporting a rehearing to potentially strike down greenhouse gas emission regulations.

Kavanaugh has generally taken a stance against net neutrality. His most notable ruling on the matter came in 2016 when he dissented and argued that a challenge to net neutrality should get a rehearing and another bite at the apple to kill FCC net neutrality rules.

In general, Kavanaugh has supported the actions of the government when it comes to national security. He ruled that Guantanamo detainees had no right no notice before being transferred to another county and also has supported the constitutionality of government data collection.

He has not always come down on the side of the government, but trends toward supporting the government when it comes to action taken in the name of national security.

There’s not much on Kavanaugh’s position on gun control and the Second Amendment. His only ruling came in late 2011 and saw him supporting the constitutionality of the gun control measures in question. Other than that, he hasn’t really had much of note to say on the issue.

What to Expect Going Forward

As mentioned, there is something of a time pressure here to get this done before the midterms are completed later this year. There will be movement on this sooner rather than later. This means that the hearings and other scrutiny will drastically improve the level of information out there on Judge Kavanaugh’s positions.

Previous
« Papa John’s Pizza Trying to Stop Its Founder, Papa John, From Taking over the Company
Next
Crisis at the Border: Custody Options after Deportation »