Parkland Shooting and Gun Control Leading Up to It

The February 14th school shooting in Parkland, Florida sent shockwaves around the nation as one of the most horrifying of the 52 mass shootings that have occurred in U.S. so far in 2018. The enormous attention the horrifying shooting has brought in the media, there has been an accompanying increased scrutiny on gun control laws and debate over how the tragedy might have been prevented.

The news has covered the actual events of the Parkland shooting in detail; most people already know the specifics of what occurred that day. However, for those who have not, the shooting was committed by a 19-year old Junior Reserve Officers Training Corps student by the name of Nikolas Jacob Cruz. He killed 17 people and wounded at least 15 more.

At the day of the shooting itself, Parkland came to school with an AR-15 semi-automatic rifle. He attempted to create a snipers nest, but after he was unable to shatter a hurricane proof window in a stairwell with 16 shots he changed his plans. His gun ultimately jammed while he still had 150 bullets in his possession, allowing his capture. 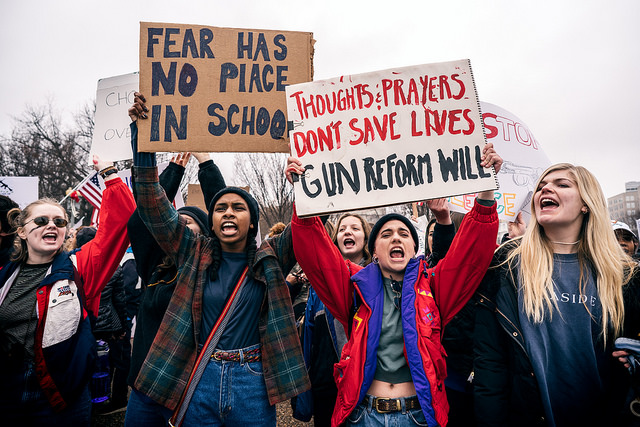 He was arrested alive after his shootings and has charged with 17 counts of premeditated murder. In the wake of the shooting, more information about Cruz has come forward, painting him as an individual with mental disabilities and social media accounts with extremely frequent posts containing anti-black, anti-immigrant, anti-Semitic and anti-Muslim slurs and comments.

His posts even go so far as to advocate the killing of Mexicans, blacks, and homosexuals. He is also seen with many firearms in his social media accounts–including posts accompanied  by threats to commit a mass shooting just like the one in Parkland.

The events of the shooting have led to nationwide boycotts, companies cutting ties with the NRA, and more. Dick’s Sporting Goods recently announced that they would stop selling assault rifles after they realized they had sold Cruz himself a gun just a few months before the Parkland shooting occurred. They determined it wasn’t the same weapon used, but still decided to take the step.

The Parkland has also given rise to enormous scrutiny to gun control laws; scrutiny which has led both the federal government and the states to take a close look at their current gun laws and decide how they want to move forward. With this in mind, let’s take a look at the moves on gun laws out of White House–before and after the shooting. We’ll also examine the moves Florida, along with other states, have made since the shooting.

White House Action on Gun Control Before and After Parkland

After Parkland, it is safe to say that gun laws have become the most discussed topic out of the White House and Congress for the last few weeks. Similarly, President Trump’s actions on gun law–before and after Parkland–have become a frequent topic of media discussion.

For instance, there has been media critiquing President Trump for signing legislation which repealed Obama era rules which made it harder for a person with mental disabilities–such as the Parkland shooter–to get access to a gun. This is true, if a bit of an incomplete story.

The regulation the media is referring to is a rule, passed in the last several months of Obama’s presidency which would have given the National Instant Criminal Background Check System–the commonly used background check system for gun sales–access to Social Security Administration data.

However, while Trump did sign the repeal of the rule, the rule itself never actually managed to take effect. Instead, it was repealed under the Congressional Review Act (CRA). The CRA, not particularly commonly used prior to the Trump administration, allows Congress to repeal regulations from the end of the previous administration by a majority vote during the first 60 days of a new administration. Congress did so and Trump signed the repeal nearly a year to a day before the Parkland shooting on February 28th, 2017.

Regardless of the action taken before Parkland, the White House’s position on gun law since the shooting has been inconsistent. First, President Trump came out in a position in line with his highly pro-gun stance during his campaign–calling for arming teachers in the classroom and making little to no comment on any gun control methods besides expressing the need to make sure those with mental health issues are not allowed to own guns–comments which led the media to discuss the record on that topic mentioned above.

However, more recently, President Trump has come out with comments which appear more supportive of gun control laws. Suggesting strengthened background checks at gun shows and, on the internet, restricting sales to younger people, allowing police to take guns away from those with mental illness without a court order and even a potential assault rifle ban. He’s gone so far as to say, “I like taking the guns early…take the guns first, go through due process second.”

This is quite an extreme turnaround, so it is unclear where the White House will settle on this issue. At the very least, this change has certainly not led to a change in positions in Congress.

Federal Law on Gun Sales to Those with Mental Illness

Without changes in Congress, no matter what the President says, there is unlikely to be much movement at a federal level on this issue. When asked about making moves on gun law, Speaker of the House Paul Ryan was recently quoted saying that federal law already prevented sales to those with mental health issues. This is true to an extent, but mostly a substantial exaggeration of the state of the law.

The law Ryan was referring to was the 1968 Federal Gun Control Act. The law does indeed include provisions regarding mental health issues. However, they are extremely narrow and only prevent possession of a firearm by people who have been adjudicated as a mental defective or have been committed to any mental institution. This is a very small portion of those with mental illnesses, even more so because of how narrow these definitions are under the law.

A person is only adjudicated mentally defective if a court or other authority determines their mental illness renders them a danger to themselves or others, or they lack the capacity to manage their own affairs. It can also include situations where somebody is ruled insane in a criminal court case. Committed to a mental institution includes situations where a court or other authority involuntarily commits a person to a mental institution.

This is a quite narrow definition, it’s certainly too narrow to have applied to the Parkland shooter. Cruz himself was not even diagnosed with mental illness, although it’s being argued in his court case. Even had he been diagnosed, it is extremely unlikely that diagnosis would have led to a situation that would have qualified under federal law. The truth is that the federal law covers only a very limited number of situations. This means that it’s down to the states to pass laws if they want laws to help avoid situations such as Parkland.