Is It Protected Speech: Can You Legally Flip Off a Cop?

On August 21, 2017 Indiana State Police trooper Matt Ames pursued a driver along U.S. 41. Ames cut off another driver, Mark May, in order to catch the driver. As Ames cut off May, May “gave the finger” to Ames. When Ames saw the gesture, Ames pursued May and ticketed him for “provocation.” Indiana Criminal Code charges an individual for $500 if the person “recklessly, knowingly, or intentionally engages in conduct that is likely to provoke a reasonable person to commit battery commits provocation.”

Mark May challenged his ticket at Terre Haute City Court. The traffic judge found May guilty. May appealed his ticket and won, whereby the conviction was dismissed. The District Attorney’s office declined to proceed further with the case.

Mr. May is now suing the state of Indiana, with assistance from the ACLU, for violating his First and Fourth Amendment rights. The ACLU of Indiana alleges that May’s gesture was expressive conduct protected by the U.S. Constitution. The lawsuit also argues that the state trooper engaged in an unconstitutional search and seizure because Ames lacked probable cause to stop May. May seeks damages, including lost income for his two days from work for his court appearances. 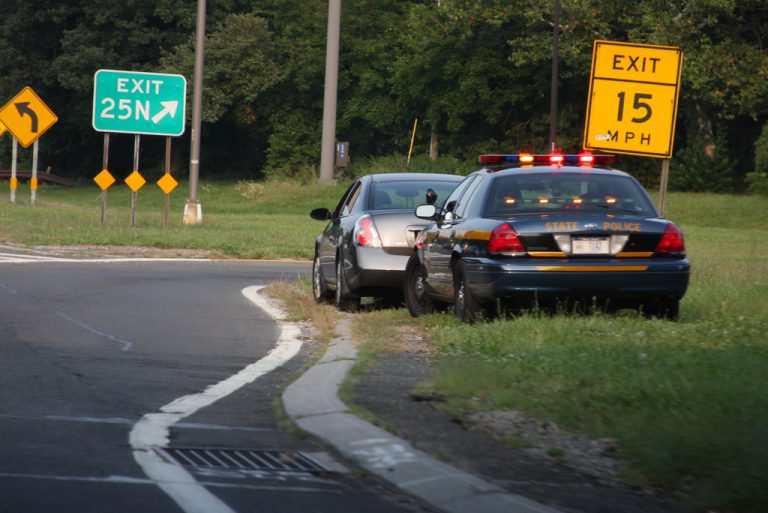 The ACLU has made two claims, but the Fourth Amendment claim is dependent on the First Amendment argument. If flipping off a police officer is constitutionally protected speech, then the officer would need another probable cause to stop the vehicle.  If it is not, then Trooper Ames would have witnessed a crime in progress (provocation) and would have probable cause to stop May.

The Supreme Court has ruled that speech can be more than mere words. Conduct can also be a means of communicating ideas. The Court is especially protective of political speech, especially speech meant to change government policy or to protest government conduct. Flag burnings are protected speech under these rules. If “giving the finger” to a government figure is a means of protesting the government, then it would also be protected speech. Suppose that a President of the United States walked down the street and everyone on the street gave him a middle finger salute as he passed by. The First Amendment would protect anyone who pointed their finger at the President.

On the other hand, there might be situations where engaging in provocative behavior would endanger not only the defendant, but the general public as well. Suppose that a gang member was driving down the highway when a member of a rival gang cut in front of him. When the gang member gave the other driver the finger, the rival gang member responds by shooting at him. The other driver misses his target and ends up shooting a nine-year old girl in another car.  Clearly, the middle finger would be a proximate cause for the murder in that case. This example is slightly exaggerated, but road rage in a gun happy culture is a bad idea.

Between these two extremes, we can derive a few ideas where this kind of law might be acceptable. First, government officials should not be able to abuse provocation to protect themselves from citizens. Second, the law should be narrowly tailored so that it protects the public from people who might injury others because of a fight.

Will Flipping Off a Cop be Constitutionally Protected?

The anti-provocation law, as written, is constitutional. Application to this case is a little harder. The fact that Trooper Ames was acting as a representative of the state at the time is central here. Normally, a court would ask whether giving another driver the figure would reasonably cause the other driver to commit battery. If we assume everyone is an adult capable of controlling their emotions, the answer is probably no. So we must ask if Trooper Ames gave the ticket because he was offended or because he thought other drivers would be offended if they were in his situation.

The state would lose if Ames pulled May over because he was personally offended by the gesture. Ames would be abusing his power by punishing a citizen for a personal grudge instead of enforcing the law as an agent of the state. Likewise, the state would lose if May gave Ames the finger because May thought that a police chase would be unsafe or that the person Ames was trying to catch should not have been targeted.

The only way that Ames could lawfully ticket May for giving him the finger is if May was angry that a car, regardless if it was a cop or not, had cut him off and if Ames thought May’s reaction would likely cause any other driver to react poorly. If this exact situation sounds too farfetched, then Mr. May should be able to legally flip off Trooper Ames.

Previous
« California Increases Anti-Discrimination Protections for Those with Military Service
Next
How do the Courts Handle Emojis, Part 1: Interpreting Emoji's »