Sessions Wants to Go After Marijuana, But Congress Isn’t Interested

The legal house of cards on which the marijuana industry has built itself–legal at a state level but illegal federally–is one which has garnered much discussion. Built on promises of a hands-off policy from the Obama administration, the business of medical and recreational marijuana has exploded in states across the nation. Medical marijuana is legal in 29 states as well as the District of Columbia. Recreational use of marijuana is legal in 8 states. All of these laws have led to booming industries which have one thing in common, the federal government could swoop in at any moment and shut them down with criminal charges.

The 2013 memo from the Obama administration, making it clear they would not prosecute marijuana offenses which were legal under state law, opened the door for this industry. By the same token, the policies of the Trump administration and its Attorney General (AG) Jeff Sessions could slam that door shut. The industry has rightly feared how Jeff Sessions would approach such laws due to his history of extreme opposition to marijuana as a whole. He has been quoted saying that”good people don’t smoke marijuana,” said that marijuana is nearly as bad as heroin, and even is on record as saying that he thought the KKK were good people until he “learned they smoked pot.”

The position implied by these statements has been mirrored in his behavior as AG. In February he warned that “states, they can pass the laws they choose…I would just say it does remain a violation of federal law to distribute marijuana throughout any place in the United States, whether a state legalizes it or not.” In a more recent policy memorandum, Sessions required all of his federal prosecutors to “charge and pursue the most serious, readily provable offense.”  This memo means that prosecutors must seek approval from a superior before seeking anything but the most serious charges available–even for low-level crimes.

To build on this, Sessions’ memo clarifies that the policy requires federal prosecutors to pursue whatever charges will yield the longest sentences–especially charges that have mandatory minimum sentences. This position is directly opposed to the policies of AG Eric Holder under the Obama administration–they had a policy of avoiding mandatory minimums with nonviolent drug offenses. Holder, and many others, have  strongly criticized the new position.  Holder specifically described it as “dumb on crime;” emphasizing the ineffectiveness of mandatory minimum sentences when it comes to achieving fair outcomes or improving public safety.

Holder is not alone in his criticisms of how Sessions has been handling drug offenses and marijuana specifically. Congress has made this abundantly clear in the last several weeks as they have made moves to shut down Jeff Sessions’ ability to pursue either his attacks on state law or mandatory minimums. 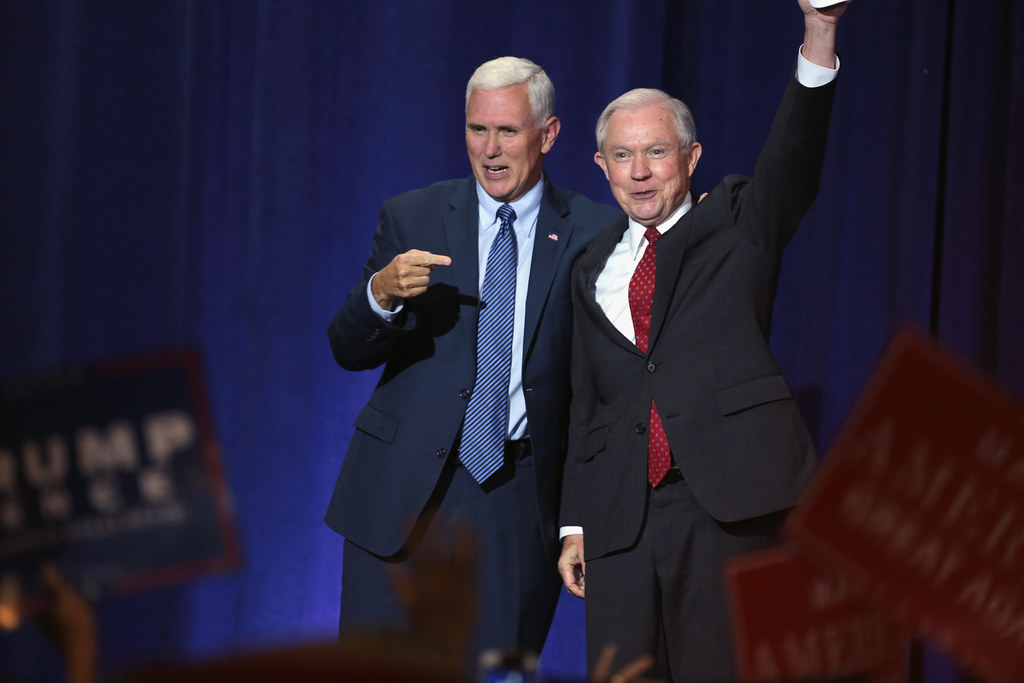 No Money, No Problem

Every year, Congress prepares a budget which basically determines what the government will provide monetary support to. This year, targeting state laws on medical marijuana is not on the list.

Section 537 of Congress’ 1,665-page spending bill specifically forbids Sessions and the Department of Justice from using any funds whatsoever to prevent states from “implementing their own laws that authorize the use, distribution, possession, or cultivation of medical marijuana.” These sort of sections aren’t really targeting Sessions specifically, there’s been a similar section in the budget every year since 2014.  However, this year it’s likely to have more impact than ever before.

The section specifically lists which states are off Jeff Sessions target list. Alabama, Alaska, Arkansas, Arizona, California, Colorado, Connecticut, Delaware, Florida, Georgia, Hawaii, Illinois, Iowa, Kentucky, Louisiana, Maine, Maryland, Massachusetts, Michigan, Minnesota, Mississippi, Missouri, Montana, Nevada, New Hampshire, New Jersey, New Mexico, New York, North Carolina, Ohio, Oklahoma, Oregon, Pennsylvania, Rhode Island, South Carolina, Tennessee, Texas, Utah, Vermont, Virginia, Washington, West Virginia, Wisconsin, and Wyoming, the District of Columbia, Guam, and Puerto Rico are all free to follow their own laws when it comes to medical marijuana. The list of states is important partially because of who it does not include.  Indiana and North Dakota have passed new medical marijuana legislation in the past weeks and months respectively.  It is notable that neither of them are on list.

In more recent news, the last few days have seen a bipartisan bill introduced in Congress.  This new bill sets its sights on mandatory minimums.  Introduced by Republican Senator Rand Paul, Republican Representative Thomas Massie, Democratic Senator Patrick Leahy, and Democratic Representative Bobby Scott, the bill is a reintroduction of the Justice Safety Valve Act. First introduced in 2013, the law allows judges to ignore mandatory minimum sentences where there are mitigating factors to support that choice.

Those introducing the bill have specifically called out Sessions approach to mandatory minimums. Senator Paul has been quoted saying that “mandatory minimum sentences disproportionally affect minorities and low-income communities, while doing little to keep us safe and turning mistakes into tragedies. As this legislation demonstrates, Congress can come together in a bipartisan fashion to change these laws.” This is a position mirrored in statements from those introducing the law alongside Paul.

Congress has shown that they are not interested in supporting Sessions in a crackdown on marijuana laws–either through legislation or sentencing. However, the industry is far from out of the reach of the Department of Justice.  What’s more, Sessions has made clear that drug offenses will be a priority for the DoJ under his watch. As long as marijuana remains federally illegal, any business built on state law promises will be at the whims of the federal government. Only time will tell if the industry will be able to reach true stability.

Previous
« Not a Hate Crime, WV Supreme Court Determines about Attack on Gay Men
Next
Starbucks is Found Liable for Yet Another Hot Coffee Case »