Are We Headed Towards a Burkini Ban?

Many towns in France have been attempting to ban burkinis. What’s a burkini you ask?  Simply a swimsuit that covers the arms, legs and hair.  So why the outrage?  They’re worn by Muslims as a sign of modesty and faith and some consider them a religious symbol.

France has laws in place mandating religion is supposed to be completely separate from public life, but because some consider the burkini a religious symbol of the Islamic faith, politicians want to ban them all together from their beach towns. This is probably really just a scared reaction, discriminatory nonetheless, from the number of recent attacks on France by Islamist extremists.

So, now you’re telling me that if a woman wants to go to the beach and keep her arms, legs and hair covered that she can’t do it? This is definitely taking it too far.

The bans have been lifted, which were recently struck down by France’s highest administrative court as a violation of fundamental freedoms, but one can only wonder if the United States is headed in the same discriminatory direction.

Sharia, also spelled Shariah, is the fundamental religious concept of Islam.  It’s not really law, but rather, it’s a way of life–a duty or a set of guidelines that one must follow.  The term literally means “the path leading to the watering place.” One of the main tenets of Sharia law lowers the status of women to have no control of their own bodies and lives.  Herein lies one of the big issues surrounding Sharia. 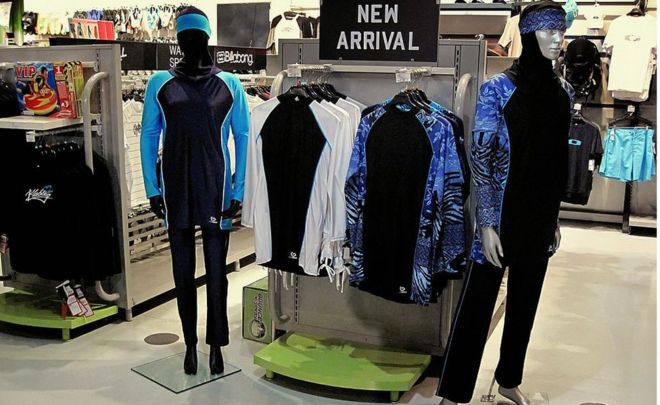 The problem came heavily to light when a New Jersey judge refused to grant a woman who was raped and sexually abused by her husband a restraining order because the husband’s actions aligned with his Muslim beliefs.  The case was ultimately overturned on appeal, but since then, states have been cringing at the thought of allowing Sharia principles to make their way into our court system and, thus, began a movement to ban it all together.

In 2010, Oklahoma residents voted in favor of referendum SQ 755, which would have mandated courts not to consider international or Sharia law. The law was challenged and a federal judge found the law to be unconstitutionally discriminatory.  Now, states can’t outright ban Sharia law, but what they have done is pass legislation banning foreign law all together. Many other states have considered passing similar legislation.

Take Soleimani v. Soleimani, for example, a 2012 case where a jury refused to recognize a mahr agreement made between a woman and her husband, which entitled her to $677,000, simply because a Kansas law prohibited the application of foreign law.  While I understand the concept of not allowing foreign laws to supersede our own laws, especially when it comes to situations that subject a person to harm, absolutely refusing to acknowledge an agreement is contrary to our judicial precedent.

A contract is a contract, regardless of where it came from and contractual intent doesn’t change just because it’s labeled a mahr agreement. Don’t get me wrong, I wholeheartedly disagree with the idea of allowing a husband to rape his wife simply because his religion allows it, but a mahr is essentially a gift from a husband to a wife once marriage is complete.  They require nothing that would be illegal here in the U.S., so why refuse to recognize it?

Courts will consider the law of the land in which the contract was made and, yes, Kansas law prohibited the application of foreign law which is how the jury came up with their decision, but the foreign agreement could have very easily been used as extrinsic evidence of contractual intent to settle the contract dispute in accordance with our laws.  This is not a new concept and we don’t need a masked discriminatory law put in place to require the courts to follow our already existing laws.

History is Repeating Itself

Essentially the same problem presented itself with the issues surrounding the migration of Syrian refugees. Numerous states took steps to prevent refugees from taking up residence purely based on the refugee’s cultural association, which is essentially no different than trying to ban Sharia law.  Just last week, Donald Trump spoke on his plans for immigration policy, which included plans to suspend immigration from certain countries.  Let’s be honest, though, with his very public statements, among many alike, of his plan to ban Muslims from entering the country, this is just a politically correct attempt to soften his previous harsh stance.

Although the idea of banning a full-body swimsuit seems ludicrous, based on our history and the political agenda of some, it’s not that the farfetched to think our country would try to implement similar measures. It’s nothing more than a discriminatory motive.  Part of what makes this country great is the concept of freedom–religious freedom is part of that.