When Do Simple Craigslist Pranks Turn Into Cases of Harassment?

Normally when you think of harassment, you think of stalkers, or persistent people who have lost touch with reality and won’t leave you alone. Craigslist, as a tool for harassment, doesn’t really come to mind.

But as Craigslist has grown throughout the years, so has its uses evolved from a classified advertising webpage, to a tool for pranks in creating phony ads. Of course, Craigslist does not endorse any type of inappropriate postings, and most of its users don’t appreciate these phony ads either. But who hasn’t run across the occasional ridiculous ad and been silently amused by it? 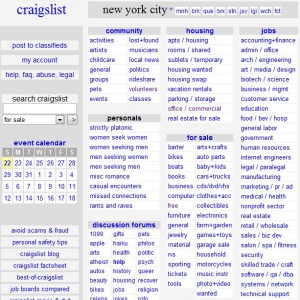 More seriously though, when does posting a phony or false Craigslist ad turn into a crime? Well, off the top of my head, I can think of plenty of circumstances where this situation could get out of hand and turn into something with serious, legal consequences.

Can You Be Guilty of Harassment Through Craigslist?

Earlier this month, there was the case of Crystal Oliver who wanted to retaliate against a friend. Oliver snuck into her friend’s apartment and created two Craigslist postings advertising sexual favors from her friend. She also included the friend’s phone number in the posting.  Before the next morning, her friend had received about 70 phone calls and five text messages. The court’s verdict? Oliver was guilty of sexual harassment.

In another case early this year, Jonathan Medina, a former pharmacist from Connecticut, wanted to retaliate against a customer after arguing about her prescription. In response to their dispute, he created a Craigslist ad for the customer indicating that she was looking for sex. As a result, the customer received 25 phone calls, and one person even tried to visit her home. Medina pleaded guilty to misdemeanor harassment and was sentenced to two years’ probation.

These are just two examples, but there are many other, similar cases out there where courts have found that harassment exists. However, none of these cases fit the normal bill of what you would expect a harassment case to be. These perpetrators did not actually make the phone calls that constituted harassment, nor did they even engage in repeated or multiple acts of harassment.  So what exactly constitutes harassment? This would be a good time to review the law on harassment.

What are the Laws on Harassment?

Regardless, there are still some common elements that can be found throughout all or most harassment claims:

1. Intent: This is a frequently found word throughout most harassment statutes, but it can be very misleading. Intent doesn’t usually require that the perpetrator have the express intention of harassing/making life difficult for the victim. Instead, it is usually enough for the perpetrator to have known about the consequences of his actions, but not necessarily have wanted for them to happen.

Take the example of the harasser who persists in making phone calls to a romantic love interest. The harasser certainly does not intend to disrupt the victim’s life, but only wants to prove how much the victim is “loved.” Regardless, the harasser’s actions in themselves are enough to make him/her guilty of harassment. It is of no consequence that the harasser had no intention of actually making the victim’s life difficult.

In the Craigslist cases, courts have made it clear enough that the perpetrators don’t have to be the ones to actually make the harassing phone calls, texts, or home visits, to be found guilty. Instead, it’s enough to just be aware of the likelihood of these consequences happening.

2. Frequency of the act: Most statutes will cite harassment as being a pattern of repeated behavior over time. However, in many circumstances, if the action is severe enough, even one act may be enough to constitute harassment.

For example, in California, one telephone call is enough to constitute harassment if it contains obscenity or violence. If not, telephone harassment only exists through repeated actions.

Somewhat similarly, in the Craigslist cases, the courts found that harassment existed even though the perpetrators had only put up one or two Craigslist postings. However, what the courts were probably swayed by was the fact that the perpetrators knew of the likelihood of these postings leading to a host of offensive phone calls.

This is by no means a precise analysis of what constitutes harassment. However, what I believe we can take away from these cases is that the definition of harassment can be quite broad. This gives courts a great deal of leeway in deciding harassment cases. More importantly, the trend for now in Craigslist cases seems to be that courts will not be lenient towards those who continue to use Craigslist for pranking purposes.

Previous
« Why Prop 19 Failed And What Will Happen Now
Next
Chicago Police Stop Settling Cases; Lawsuits against Cops Plummet »